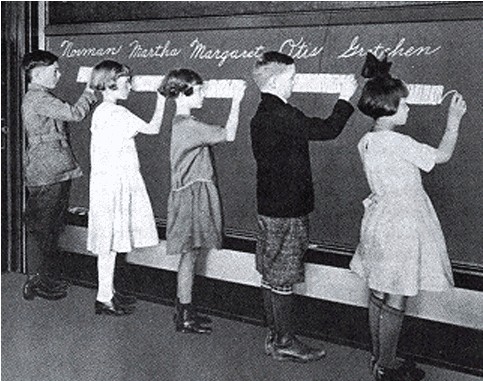 Students practice the Palmer Method of writing years ago. No more.

There is one less subject schoolchildren in Indiana will have to master when school reopens this fall - cursive. For younger readers unfamiliar with that term, it has nothing to do with bad language. It's that old style of penmanship (what's that?) also known as "handwriting," or "longhand," where letters of a word are strung together in one stroke of the pen. It is faster to write this way than it is to print. It is also a disappearing art of little use to those who only write with a keyboard. It is a skill like knowing how to ride horses faster - of limited use to those who only drive cars.

Of course there is a tinge of sadness for those who love books, or even more so, manuscripts. How many of the great works were first created by an author spelling out the words in cursive? It is unlikely anyone knows, but it certainly must be a large percentage. Then again, many of the great books were first written in Latin, and how many people can read or write that anymore?

The Indiana Department of Education was just bowing to reality when it sent out its memo over the summer. Schools in the state will no longer be required to teach cursive. They will not be prevented from teaching it if they so choose, but it will no longer be a requirement. One can only suspect that some will drop it this year, with more removing it from the curriculum in the years ahead until it effectively disappears. The handwriting, so to speak, is on the wall.

The death of cursive can be blamed on the same cause as the death of books, retail stores, personal interaction, objective news reporting, intelligent thought, good manners, and everything else good and worthy - computers and the internet. Young people grow up today pecking at a keyboard. Even printing letters may seem unusual to them, but at least the letters look similar to what they see on a computer monitor. They can imitate. Cursive writing looks like another language from the one displayed on the keys of a keyboard.

If the computer/word processor took away the need to write out schoolwork by hand, the internet removed the need to handwrite letters to your friends. That has been replaced by email, instant messages, text messages, and social network postings. All of those are written on a keyboard as well. Teaching a faster method to do something people don't do anymore is not a particularly good use of school time.

Now people do still occasionally have to write out messages. If you are trapped on a mountain alone, outside of cell phone range, you need to be able to carve out "Help" in the snow. However, what we find is that even though cursive was still being taught in the schools, recent generations haven't been using it anyway, even when compelled to write with a pen. When the College Board, creator of those ubiquitous SATs (Scholastic Aptitude Tests), added a writing section to their tests in 2006, they found that only 15% of the students used cursive. The remaining 85% printed their essays, even though these were timed tests, giving an advantage to those who could write faster. Use of cursive had already greatly atrophied even when people were called on to write with a pen, and write quickly at that. I stopped using cursive, even for note taking, many years ago, using a self-invented shorthand of printing with abbreviations. I thought what I did was unusual. It turns out this was about as "unusual" as 85% of the population.

This does leave me with one question. How will coming generations sign their name? Will printed signatures appear sufficiently unique to be used on legal documents? Perhaps people will just make up their own squiggles. So many signatures these days are indecipherable anyway. Or, maybe we could adopt the Chinese system of "chops," a personal carved ink stamp that is used as a signature. Then we won't have to know how to write or print at all.

Lest anyone think what has happened here is an aberration, remember - this is Indiana. Indiana is not the center of cutting-edge, radical new thought, be it in politics or education. It is a very conservative, heartland state. If a long established tradition cannot make it there, it cannot make it anywhere, Indiana, Indiana. Rest in peace, Austin Palmer.