It's Been a Tough Month for Large Book Retailers 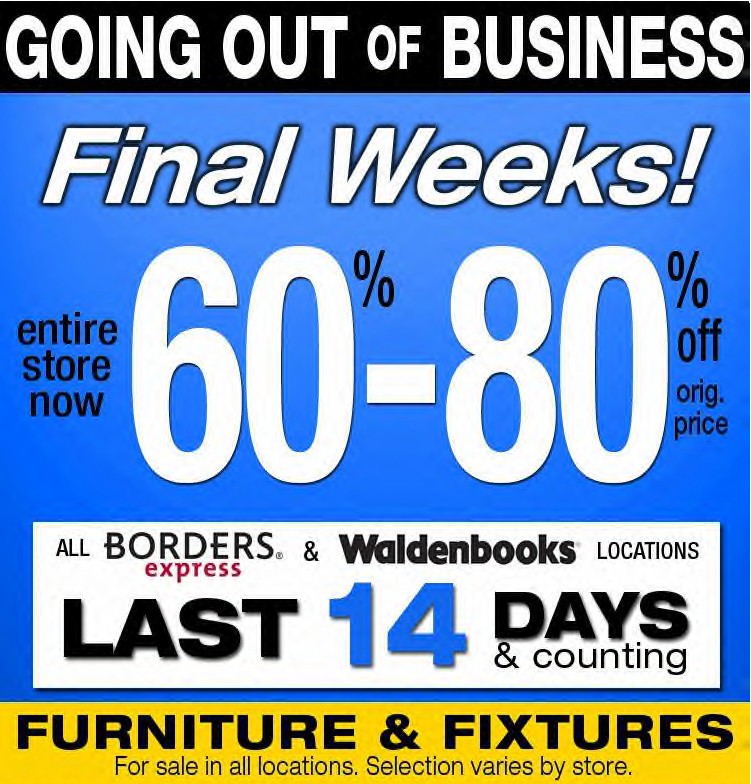 This has not been a good month for large, chain bookstores, especially so for their investors. Physical retailing has been battling online selling for a decade, and physical books have been battling electronic ones for the past two years. Neither has fared well. Both will survive for many years to come, but will continue to lose market share to their electronic counterparts. It makes for a difficult business, and tough investment.

A little over a month ago, the number one bricks and mortar book retailer, Barnes and Noble, its stock long in the doldrums, received some good news. Liberty Media, noted for buying up troubled companies, made an offer of $17 per share. Now this may not seem exciting for a company whose share price reached $45 five years ago, but it had spent most of the year under $15, and briefly hit an all-time low under $10. However, Liberty was less interested in its stores than its Nook electronic reader, a surprising success after belatedly entering the market way after Amazon's Kindle. Kindle remains by far the leader, but the Nook has become a solid number two, garnering around a quarter of the market and growing.

However, it appears that Liberty and Barnes and Noble could not agree on the value of the Nook, so Liberty withdrew its takeover bid and instead purchased $204 million worth of B&N preferred stock. It pays a hefty 7.75% dividend and can be converted into a 16.6% share of the company. This provides the company with welcome cash, but the dividend rate it must pay is high, and a conversion of the preferred stock to common will result in shareholder dilution. The investment may be good for the company, but not so good for shareholders. The stock price quickly dropped to $10, and recently was trading for $11. That $17 offer doesn't look so bad now.

For the number two physical retailer of books, there is really no more to say. In February, Borders filed for bankruptcy protection, and in July announced that no buyer for the chain could be found. Instead, it would close all of its stores and liquidate its assets. That liquidation should be completed by the end of this month, bringing a final end to Borders' 40-year career. You may find some bargains in the next few days at your local Borders store as discounts are large, but what is likely to be left now are the dregs. You can also find Borders stock at a cheap price. It has ranged between 2 and 4 cents a share the past few weeks. At its peak it cost $37. Don't waste your money. It isn't worth 2 cents. Eventually, it will settle at zero.

The third largest bricks and mortar book retailer in America, soon to be number two, is attempting to pick up some sales from the Borders bankruptcy. Books-A-Million, the southern-based bookstore chain, attempted to purchase the leases, fixtures, and inventory of 30 defunct Borders locations. The two could not reach a deal, but Books-A-Million will be taking over the leases of 14 closing Borders locations. BAM (as Books-A-Million is also known) is looking to expand its footprint north. Stores in Maine, New Hampshire, Connecticut, Maryland, New Jersey, Illinois, Wisconsin, Michigan, Pennsylvania and Ohio are reportedly among those sought to be taken over.

While Books-A-Million has been swimming against the tide by actually expanding its physical presence, it still has not been an easy time for the growing chain. The firm recently reported a $2.9 million loss for the second quarter, compared to a $1.9 million gain for the same quarter in the previous year. Its recent stock price, below $2.50, is approaching historic lows. That's about one-quarter of its price of 20 years ago, not a great long-term investment. The troubling results showed an 11.4% decline in overall revenue and a 12.9% decline in sales at same stores year over year. CEO Clyde Anderson stated, "A soft publishing lineup, the effect of e-book migration and the impact of Border's liquidation all contributed to the decline in comparable-store sales."

However, there remains one positive book investment story - Amazon.com. The largest online bookseller, and leader in the electronic book field, continues to trade around the $200 per share level, near its record high price reached earlier this year. Indeed, if you bought Borders stock for $37 in 1998, you could have purchased Amazon for half that price. Now Amazon stock is worth $200 and Borders 2 cents. The challenge for investors today is to figure out which companies are the next Amazon, and which are the next… Borders.