iPads, eReaders and the British Library 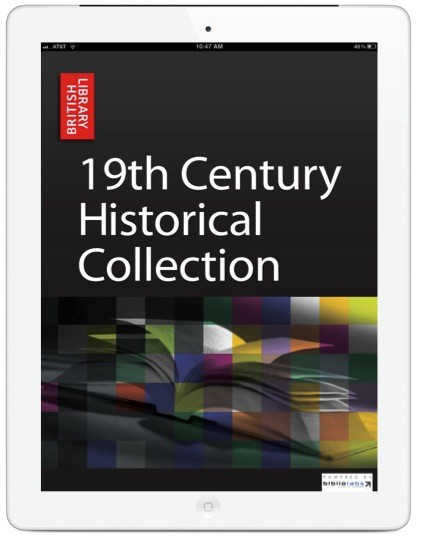 The British Library recently announced that it is offering an "app" that will allow users to read over 60,000 19th century books from the library's collection on their iPads. I can't believe I am even writing such a story. What do "apps" and iPads have to do with books anyway? Not much in my world. I don't even have an iPad, though I generally know what one is. My daughter has one and loves it, though I don't think she reads a lot of 19th century books. I don't even have a Kindle or a Nook. Technology to me is a cumbersome desktop computer with a million wires running all over the place. It is a wire-full. I have a cell phone but it is mainly just that - a telephone. Okay, I send more text messages than make calls now, but you would not be able to read a book on its screen without a microscope. The screen's not much larger than a postage stamp, the "send" button on the precursors of email. For those who don't know what email is, it's how people used to communicate in the days before text messages, Facebook, and Twitter.

I digress. Back to the main story. This basically innocuous news sheds light on the question of the direction of electronic reading in the years ahead. The issue is no longer between electronic and traditional print reading. We all know that electronic will not totally replace print anytime soon, but will continue to take market share year by year until it becomes the predominant form. What is not clear is whether it will be an electronic reader like Amazon's Kindle, or a tablet computer like Apple's iPad, that will lead the way.

The difference is that the Kindle is a dedicated electronic book reader. That's what it does, and essentially, that is all. It doesn't brew coffee or make toast. The iPad, on the other hand, doesn't do those either, but Steve Jobs is working on it. The iPad does just about everything a computer does. However, it does so in a small, lightweight, portable version. You can take it everywhere with you, and as long as you're close to a "wifi" connection or some such source, you can surf the net, send messages, check up on your Facebook "friends," play games, and do whatever other digital activities you choose. You can now go anywhere and still not have a life.

Another thing you can do with your iPad, and similar devices, is read books. The British Library is now making that even easier, provided you like oldies. However, Kindle-type electronic readers are still the overwhelming favorite among those who read books electronically. The issue is that a books-only reader can be designed to be ideal for reading books, in terms of size, keys, screen, lighting and the like. A tablet computer has to serve many masters. Think of it as trying to fit a newspaper into a book format. A newspaper has a lot of short stories, and people want to be able to scan through them quickly for what is of interest. That is not easy with the smaller format book. So newspapers were created in a larger format to work better for the daily news. That's the dilemma makers of tablet computers face in creating something that serves many masters. It may not be ideal for all.

On the other hand, there is the natural desire to reduce the number of gadgets you need to carry around with you. That's why mobile "telephones" now serve as music players, email writers, cameras, and such. No one wants to carry around all of those things. Something which does all of that and read books too would spare people one more device to carry around (and lose). Readers will inevitably gravitate to such a device, provided it can be made to be as convenient and easy to read as a one-feature electronic reader such as a Kindle.

What we are likely to see is a merging of the two, electronic readers that can do more than just read books, tablet computers that are better suited for reading books. Already, Barnes and Noble has added features to its upper level Nook electronic readers, such as web access and email, that are making it look more like a base model tablet computer.

Currently, the British Library "app" provides access to 1,000 books, but that number will reach 60,000 by the end of summer. Books are displayed as they originally looked, that is, as scanned pages, rather than electronic reader versions. The "app" is available without charge. For more information, go to this link:  click here.