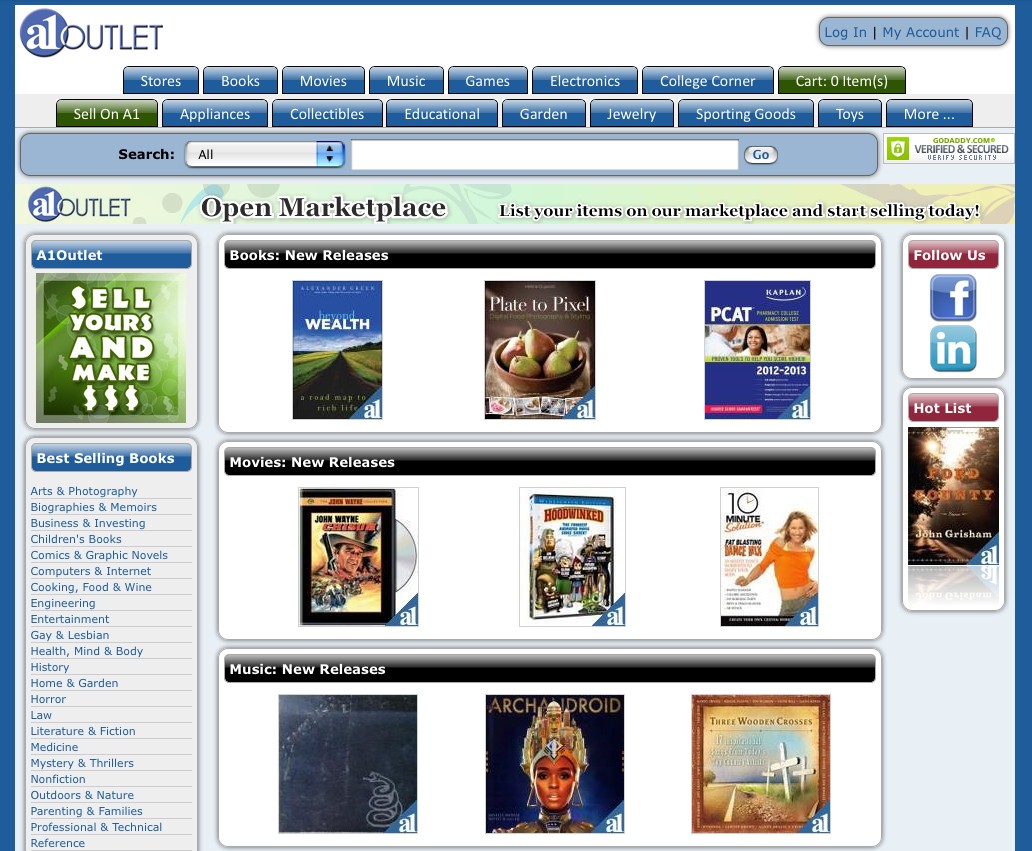 A1 Books, a pioneer in online bookselling once larger than Amazon, has made something of a return from the grave, though just how much of a return is still to be seen. A1 began selling textbooks online in 1995, pre-Amazon. It soon added other types of books as its inventory grew. It claimed to have some 500,000 books in stock by the late 1990s. However, by this time, a much better financed Amazon was speeding away to a dominant position in selling from its own stock. Meanwhile, the early book listing site Interloc, now renamed Alibris, and the upstart American Book Exchange, now known as AbeBooks, grabbed the lion's share of selling books owned by independent dealers. A1 continued along, but never quite caught onto the wild momentum of the late '90s internet.

In the middle of the last decade, A1 made a major attempt to also become a listing site for others' books. An aggressive push was launched to entice other dealers to list on the site, with the major carrot being no listing fees and a reasonable 10% commission on sales made. The fee structure, by that time, was a relative bargain, but A1 just didn't have the customers needed to make it a major factor. Lower commissions are of little use without sales. A1 was not able to generate the income necessary to remain a viable operation. Despite continued aggressive plans to grow, the company ran into serious financial trouble last spring. Creditors filed to put it in bankruptcy. By summer, the bankruptcy court ordered A1 shut down. The website closed and its assets were put up for auction to help pay creditors. The final chapter seemingly had been written for the internet bookselling pioneer.

Indeed, A1 Books is still not to be found, except in India, where its once local subsidiary still survives. However, another secondary operation in the U.S. has made a comeback. Originally created in 2004, but not placed into operation until 2009, a division known as A1Outlet was created to sell items beyond books. Like A1 Books, it closed down when the company went bankrupt. However, it has since reemerged from the ashes of bankruptcy.

A1Outlet is something between what Amazon and Alibris evolved to. Like Amazon, it is willing to offer anything under the sun, but more like Alibris, it focuses primarily on books, movies, videos and games. It is late to the game in a crowded field, not normally a good place for a company hoping for success. Usually, such a start-up needs something new and better to find a place against an established field. The normal movement as once-new business fields, such as internet retailing, mature is contraction, not expansion. It is not clear what can make A1 sufficiently distinctive, beyond its still reasonable 10% commission with no listing fees, to succeed. As we have seen, reasonable rate structures without customers has not translated to success for A1 in the past. What will bring in the customers this time around is not clear.

As to what is the relationship between the old A1 and the new A1Outlet, you can be sure there is nothing official. A1 Books, as it was, is gone forever. It went through a dissolution bankruptcy, not a reorganization. As their brief press release makes clear, despite the earlier life of its name, A1Outlet was "established in 2011."

The brief press release tells us nothing about who is the owner and who is involved. However, we will assume there are carryovers based on the new A1's address:  35 Love Lane, Netcong, New Jersey. That is the same address as the defunct A1 Books. The release explained, "The staff behind A1Outlet has many decades of experience in e-commerce." Probably some of that was with A1 Books. As to whether that includes the old A1's founder and leader throughout its existence, Shinu Gupta, we can't say. No names are listed. The release does say, "You'll find everything from books, music, movies, games, clothing, electronics, to even hand made items and more." And, in a bow to the predecessor's beginning as a textbook retailer, it adds, "We support sellers of all platforms from the college student looking to sell last semester's books to large sellers who may have warehouses all over the country."