End of an Era - Last World War I Vet Passes On 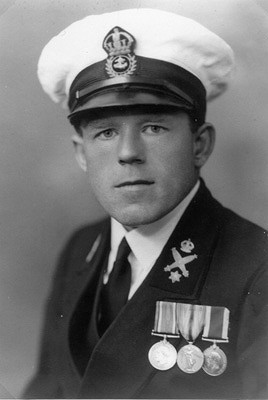 Claude Choules, many years ago.

Word came over the news wires a few weeks back that the last combat veteran of World War I has died. Claude Choules joined the British Navy at the age of 16, serving for a year before the war ended. He later moved to Australia, where he spent most of his life. Choules was 110 years old.

There remains one surviving veteran, 110-year-old Florence Green of England, but she was involved in food preparation, not combat. The last American veteran, Frank Buckles, died earlier this year.

Choules was reportedly a good-natured man. His secret to long life was to "keep breathing." He also recommended cod liver oil, though having to consume that for 110 years sounds like a fate worse than death. His daughter commented, "It's going to be sad to think of him not being here any longer, but that's the way things go." The daughter is 84 years old.

Despite being a humorous man, Claude Choules had a serious side. He became something of a pacifist, and refused to participate in parades celebrating military service. "He didn't believe in war," his daughter said. One can understand the attitude. After all, the First World War was "the war to end all wars." It didn't turn out that way.

This may not sound like a story for a book site. Oh, there is one obvious connection. Choules was an author. He wrote an autobiography, The Last of the Last, published when he was a mere 108. I have no proof of this, but I think he must have been the oldest person to publish his first book. He recalls when the first automobile drove through his town, and when cigarettes were a penny a pack. However, there is another connection between Choules and the printed word. No, the last book has not yet passed on, though the role of the printed word is fading, being replaced by a new generation of technology. The more apt connection to the older technology is that Mr. Choules' war was the last to be brought home primarily by the printed word. A generation of technology, like that generation of soldiers, has been replaced.

In the nineteen-teens, news of the war reached people through newspapers and books. Our record of that conflict is found almost entirely in printed words. Sure there are photographs, but those offer no words of explanation. There are some grainy black and white soundless movies, a few with captions, and perhaps some people saw these in newsreels at the theater. You might think people were glued to their radios to hear the latest news, but radio broadcasting did not begin until 1920. Mr. Choules went off to war at the apex of the printed word.

By the Second World War, people were still getting much of their news from newspapers, but the most recent news flashes were now coming to them via radio. Newsreels with sound brought vivid images to their theater screens. By the Korean War, many homes had televisions. The Vietnam War became the first war, quite literally, "broadcast into America's living rooms." Newspaper circulation was declining. People watched the evening news, not the evening newspaper. Now, the seemingly endless wars in Afghanistan and Iraq reach people through television and the internet. Newspapers, fading away, are barely relevant as they publish yesterday's news to a generation that wants to know what is happening now. We see, hear, and read off of electronic screens. Paper and print are virtually irrelevant to news. Many newspapers will soon join Mr. Choules as pleasant memories of days gone by.

However, the printed word remains the primary source of collectible information from that age. I have no idea what people will collect should they ever collect the current wars. Most information was generated in electronic impulses, ephemeral but not collectible ephemera. However, for those who want to collect the First World War, and all of those previous conflicts through contemporary material, printed works will always be the primary source. All wars have their ephemera, but the news of those battles, and everything else that went on in the world from 1455 to around 1920, came via the printed word. Old books and printed works will always hold a place for those interested in those times, even if it is unclear what their relationship will be to events taking place in the world today.