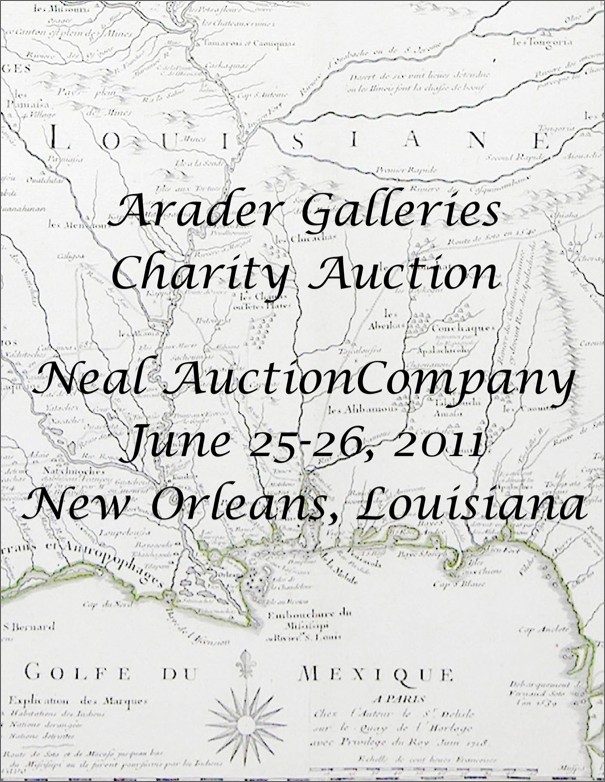 The Arader Galleries will be conducting their third annual charity auction June 25 and 26 at Neal Auction in New Orleans. These auctions are designed to appeal both to your self-interest and public spirit. All items are being offered without reserve, opening the opportunity for some outstanding deals. Additionally, 20% of the hammer price will be given to the charity of your choice. It's your chance to do good by doing well.

The featured artist/writer of this sale is John James Audubon. Audubon is best known for his drawings of birds, and this sale includes over 65 aquatints from the elephant folio edition of Birds of America. This is the most expensive printed book ever sold at auction, a copy selling last winter for $11.4 million. Arader notes that this averages to $26,200 per plate. Some of the images from this book may sell at the Arader auction for less than 10% of this amount, and the great majority are estimated to sell for less, often a small fraction.

The Arader Galleries will also be offering a complete, three-volume set of the First Imperial Folio Edition of Audubon's The Viviparous Quadrupeds of North America. This was Audubon's final work, completed by his son, John Woodhouse Audubon. It was the great artist's one look at animals that walked on all fours, rather than glide through the air. With 150 hand-colored plates, this is the largest color plate book published in America during the 19th century.

Additionally, over 20 hand-colored plates from Audubon's Quadrupeds will be offered separately. England's most notable bird artist is represented by 20 framed hummingbird illustrations from John Gould. Complete sets of Gould's Hummingbirds, Birds of Great Britain, and Birds of Europe are also offered. Sixteen framed cats from Daniel G. Elliot are on the list, as are botanical images from John Robert Thornton.

Other items being offered include Guillaume Delisle's 1718 map, the first map to show the name of Texas (Tiejas) in print. There is a copy of J.T. Lloyd's contemporary Civil War map of the Mississippi River.

Those who purchase items at the sale may designate 20% of the hammer price be donated to the charity of their choice. Among the many past beneficiaries of these auctions are the University of Florida for $700,000, University of Tennessee for $640,000, Santa Barbara Museum of Natural History for $189,000, American Antiquarian Society $11,000, the Wilderness Society $15,000, San Francisco Zoo $10,000, East Side Settlement $10,000, and Pack 1703 of the Boy Scouts $2,650. All told, over $2 million has been donated to worthy causes through these auctions.

Neal Auction may be reached at www.nealauction.com.