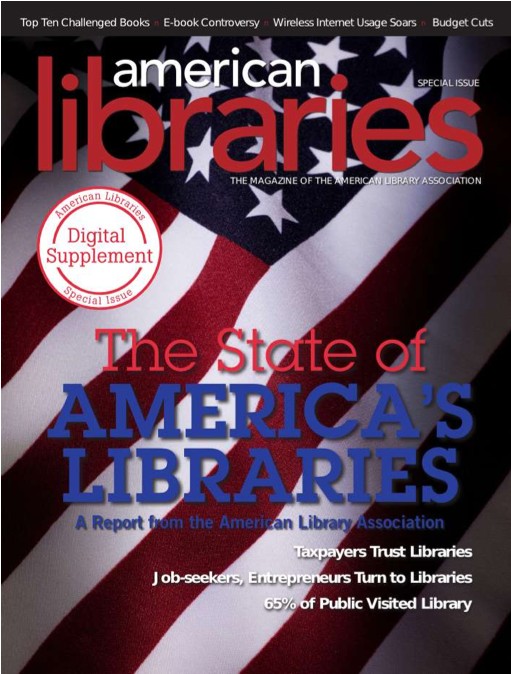 The American Library Association recently released its annual report on The State of American Libraries. Americans today have something of a schizophrenic relationship with our libraries. We love them in theory, use them in substantial numbers, but hate to pay for them. Recessionary times have made us even more unwilling to pay for public services, adding to the enormous challenges libraries already face due to changing technologies. What role public libraries will play in the future will depend very much on what priorities we as Americans set for ourselves. Other nations, undoubtedly, will face their own decisions going forward based on their sets of priorities, which may or may not be the same as those of Americans.

Earlier this year, the ALA commissioned Harris to conduct a telephone survey of just over 1,000 adults. The amount of library use surprised me. They found that 65% of those polled had used the library during the past year, including 72% of women, 58% of men. Working women, particularly aged 18-54, were the highest users. Working mothers topped the list at 88%. Some of the usage came over the phone or online, but 62% of the users visited in person. A total of 58% surveyed said they had a library card.

The survey also found that 31% of adults, including 38% of senior citizens, ranked the library at the top of their list of tax-supported services. Of particular note, respondents liked the democratic nature of the library, that providing its services free of charge provided equal access to all. The vast majority - 93% - believe it is important that library services be free. In perhaps a surprising finding, 79% agreed with the statement, "My public library deserves more funding."

If 79% of the population believes that libraries deserve more funding, then at a minimum, maintaining flat financial support should be a chip shot. Alas, nothing is ever so easy. The ALA report cited numerous instances of library cutbacks, reduced funding, reduced hours, reduced material, and in some cases, libraries closing entirely. The report explained, "some state and local budget-cutters see libraries as easy targets."

This seeming disconnect goes straight to the heart of America's love/hate relationship with public services. We love the services, but hate to pay for them. We recognize and accept that if we go to a bookstore, we will have to pay for the books. However, when it comes to paying for the books at a library we read or check out for free, and all of the other services libraries provide without charging a fee, we balk. We don't mind spending money in the marketplace, but paying a dollar in taxes just rankles us in ways spending ten dollars in a store does not. Ultimately, we get to choose, but we cannot live on borrowed money forever, and if our choice is to maximize the funds we keep in our own pockets, then we will have to accept minimizing the services available to all of us on a collective basis. That includes libraries, parks, schools, roads, hospitals, police and fire protection, or anything else supported by taxes. There is no clear right or wrong answer here, just a choice we have no choice but to make. Sadly, in the real world, we cannot eat our cake and have it too.