Robespierre's Notes Sold, Then "Preempted" by France at Sotheby's Auction 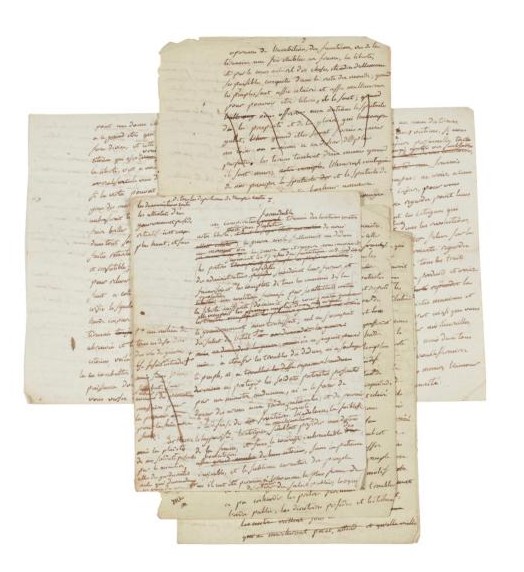 Some interesting maneuvering at the last minute at Sotheby's in Paris has saved a priceless, but nonetheless very expensive, French manuscript for the French people. Offered for sale on May 18 was 116 pages of handwritten material by Maximilien Robespierre, leader of the worst part of the French Revolution. Robespierre's papers generated great support among the French people, even if the man himself is not so beloved.

In the chaos of the French Revolution, Robespierre rose to power in July of 1793 as the de facto head of the ironically named Committee of Public Safety. Robespierre had already been a leading voice among those who successfully argued for the guillotining of King Louis XVI, and under his leadership, many more heads would role. His rule is today more commonly known as the "Reign of Terror." Executions were no longer limited to monarchists and the like, but practically everyone came under suspicion, and even ardent revolutionaries were executed without trial on the grounds they had become counterrevolutionaries. Robespierre can be seen, at least by his defenders, as an idealist, someone who believed that terror was actually justice used to defend the downtrodden of society. His justification of the means is similar to that of today's terrorists, even if his goals were entirely different.

Eventually, not even Robespierre could avoid his own reign of terror. On July 26, 1794, he delivered a lengthy speech before the Convention of Deputies that hinted at conspiracy on the part of some of its members. No names were given but many members feared they were next in line for "justice." The next day, the Convention had Robespierre and his closest allies arrested at the Hotel de Ville, where they were staying. Several tried to escape or commit suicide, Robespierre shooting himself in the jaw in an apparent suicide attempt. Instead, he was imprisoned, and using the same quick form of "justice" he had advocated for others, Robespierre was executed by guillotine the following day.

What remained unknown to most of France for over two centuries was that there was this handwritten document by Robespierre, created between 1792 and July 1794. It includes some of his philosophical thoughts, drafts of speeches and articles, and a letter. Many include changes in his hand that may shed further light on his thinking. Included is a draft of his famous speech of July 26 that led to his execution two days later. The document has spent the last 200-plus years in the hands of the descendants of Philippe Francois Joseph Le Bas. Le Bas was a close associate of Robespierre, one who successfully committed suicide that night at the Hotel de Ville.

Then came the dramatic moment. The French National Archives has the power to "preempt" a sale. This means that if an item is of historic importance to the nation, it can preempt the winning bid, that is, seize the piece by paying the amount of the winning bid. Evidently some other bidders wanted these documents badly, and who knows how far the winning bidder might have taken the bidding had he known how high the Archives were willing to go. Certainly this was more than the Archives expected, or had cash on hand to buy, but aggressive fundraising immediately began after the sale was preempted. In total, €979,400 will need to be raised as letters written by Maximilien Robespierre's brother Augustin and Le Bas were also preempted. A French legacy, albeit a somewhat tarnished one, has been saved for France. Viva la France.