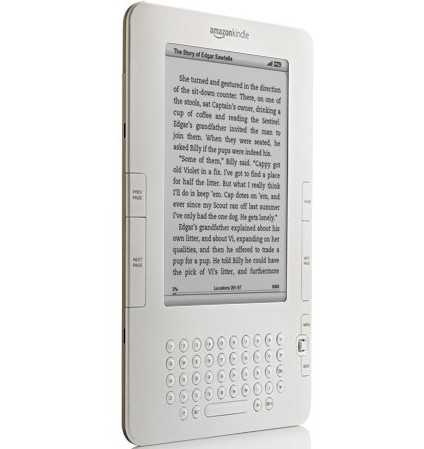 Amazon.com announced a major change with regard to its Kindle electronic reader. The retailer of Kindles and electronic books (among many other things) announced that Kindle owners will at some point this year be able to download library books onto their electronic readers. This may not sound like a big deal. Other e-readers already do this. However, for Amazon, it is a major step away from a business model that may indicate the barbarians are about to break through the gates.

In a news release dated April 20, 2011, Amazon announced that users will be able to borrow books from over 11,000 local libraries. Access will be available where the library makes use of digitization software provided by OverDrive, a firm that specializes in enabling libraries to offer books in electronic format. No date was given for when this service will be available beyond "later this year."

In the announcement, Kindle Director Jay Marine is quoted as saying, "We're excited that millions of Kindle customers will be able to borrow Kindle books from their local libraries." My guess is Mr. Marine is not quite as excited as he lets on. The difference between Amazon's Kindle and other brands, say Barnes & Noble's Nook, is that Kindles use proprietary software. You want a book for your Kindle, you buy it from Amazon. Period. Kindle was the first e-reader out there, and it dominates the market. A closed system guarantees that owners of most electronic readers must buy their books from Amazon. There is no other way to get them.

However, libraries have long been a resource for free books, and who doesn't like free? In the early days of e-readers, this was not an issue. Libraries offered only printed books. Now, libraries have stepped into the digital age, and many if not most offer books electronically. Access is really easy - in many cases you can simply download from home and never go the library. So, if you want to download a book the library holds in a digital format, and not have to pay for it (same as borrowing a traditional book from a library), you just plug your e-reader into the net and download it from the library. Oops… not if you have a Kindle. You need another brand, such as the Nook.

The dilemma for Amazon is obvious. They would undoubtedly like to lock all books but those offered by their store from access to the most widely used electronic reading device. To do so, however, means that customers who would like to get those free electronic library books must buy another brand of reader. That is not good for Kindle sales.

Still, there is something even worse. These other readers are open source, that is, you can buy your books for these devices from anyone - Barnes & Noble, Borders, Google, anyone who sells electronic books. So, if consumers purchase an e-reader other than a Kindle, it means they can buy their books from anyone, rather than just from Amazon. Sales at their e-book store will also take a hit. Allowing Kindle owners to download free library books may reduce Amazon's sales, but driving library users to other e-readers could adversely affect sales even more. Considering how many people want to borrow books from libraries, the loss of sales is likely, in time, to be quite large. Amazon has evidently chosen to allow for this one break in its proprietary model before a flood of customers migrate to other devices so they can gain access to free library books.

Will this lead Amazon to open their Kindles to books obtained anywhere? Probably not yet. Kindle users might like to purchase their electronic books anywhere, but as long as Amazon offers competitive pricing and selection to what others offer, there isn't a compelling need for Kindle users to go elsewhere. Where Amazon can't compete is against libraries, where the electronic books are free. This step takes away a major advantage its competitors possess. In time, competition may force Amazon to reassess its closed system. Google will probably make millions of out of copyright books available free, and this may be the competitive advantage that forces Amazon to open its system. For now, Amazon will probably allow for this one breach, and hold on to its other proprietary advantages as long as it can.

Amazon has offered users a feature that may help keep them loyal to their Kindles. Kindles allow their owners to highlight sections of a book or make margin notes. They will be able to do so on their library books as well. Of course, they won't be defacing the electronic impulses. The next borrower won't see them. However, if the Kindle owner ever borrows the same book again, or buys a copy, those notes will show up on their Kindle screens.