New Thinking about Some Old Ideas 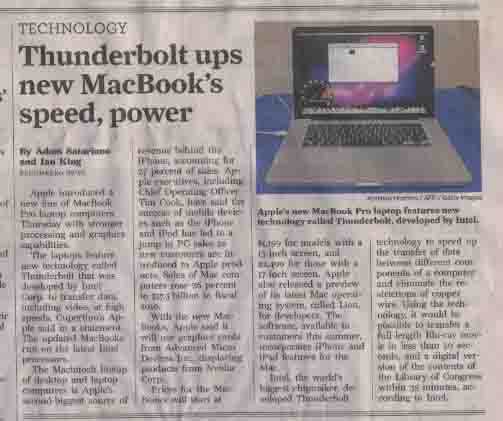 The Library of Congress in 35 minutes

The news arrived on page D2 of the ever-thinner San Francisco Chronicle on Friday 25th that “Thunderbolt ups new MacBook’s speed, power.”  The story focuses on a new technology – Thunderbolt – “to speed up the transfer of data between different components of a computer and eliminate the restrictions of copper wire.  Using the technology, it would be possible to transfer a full-length Blu-ray movie in less than 30 seconds, and a digital version of the contents of the Library of Congress within 35 minutes…”.  Hum….

I’m not sure who will want to have a personal copy of the Library of Congress inventory but its nice to know that, if the LOC permits, I can have one in thirty-five minutes.  I don’t think I’ll need one however.  I have, as do you, access to the same records online and I don’t use them much.  They are so yesterday.


As for downloading a Blu-ray movie I don’t do that either although there is talk in our house about doing it.  By comparison, no one here has mentioned downloading a digital copy of the Library of Congress but I’ll keep you posted.


Implied in the Chronicle piece is the assumption that the LOC inventory, like a Blu-ray movie, contains something I should want but I’m not so sure.  A generation ago it was de rigueur to have an encyclopedia in the house.  Now we look online.


Movies are going through their own transition but their appeal is not in question.  The digital content of the Library of Congress is another kettle of fish.  The importance of the LOC records is primarily relational.   It is what they have.  As such the information in the LOC is probably not something I’ll need a copy of, only access to when records in it resonate with results in other databases.


Google will in time create an Internet relational database experience and all records in the LOC become part it.  They won’t be lost or become irrelevant but their power will be in their relationship to other records.  On a small, but complex scale, this is what we have already done on the Americana Exchange by combining three databases into a single search:  material in upcoming auctions, in Books for Sale and in the historical records in the AED.   It contextualizes the search and we are moving into a world of contextualized results.

The internet will in time retrain the human mind to think relationally – that is to see, feel and understand the relationships between things and concepts - from the closely associated to the widely disparate.   The LOC, as a single set of facts, will be useful but not crucial as we become ever more reliant on the emerging meta-data approach.

In a few years this will be a common experience.  When it becomes the Google experience it will transform, by reordering, our thought processes.  For today those using the triangulated search on AE are early adapters of what will become an extraordinary transition in how we think.  It’s just a beginning.  It turns out old books can still teach some new tricks.