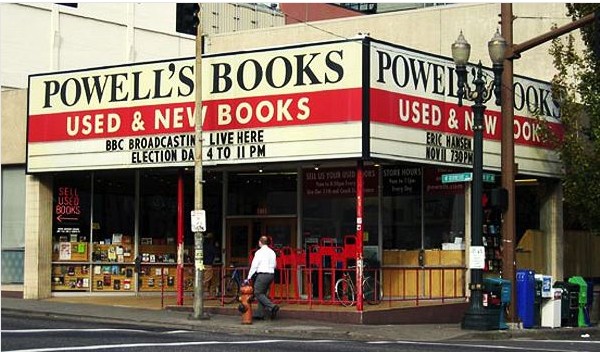 Powell's Books, the large Portland, Oregon, retail store and online bookseller recently announced that it would be laying off 31 employees. This represents 7% of its unionized workforce. This number somewhat masks actual decline in employment according to a union representative who estimated a reduction of around 40 more employees over the past year due to attrition. Management concluded attrition was insufficient considering the decline in sales. Between attrition and this layoff, the drop in union employees over the past year would amount to over 15%.

Our focus here at AE is on older and collectible books, while this is primarily a story about new books. Nonetheless, the long-term implications for the collectible book trade raise questions.

In a press release, Powell's stated that "changing consumer behavior" is the primary cause for the downsizing. In particular, they pointed to the declining sales of new physical books, many of those sales now going to electronic editions. An email sent to employees was more blunt:  "Sales for this fiscal year are down and we expect this trend will continue. The largest decreases have been in new book sales. We see this as a clear indication that we are losing sales to electronic books and reading devices. Given the company's declining sales, combined with industry data on the rapid growth of electronic book sales, we expect to see continuing erosion of new book sales over the next few years. While we believe we can compensate for some of the loss with solid used book sales and growth in gift sales, the erosion of new book sales will continue to take its toll."

In addition to the lay off of 31 union employees, Powell's told its non-union workers that, while not being laid off, they will be subject to a one-year pay freeze as of July 1, and almost immediately company contributions to their 401k (retirement) accounts would be suspended for at least a year. Unionized workers not laid off will retain all current benefits.

Those in the old book trade may be able to take some solace from the claim of "solid used book sales." However, the press release included a statement from Powell's President Emily Powell that is particularly prescient, while at the same time vague:  "I feel it is critical to make some very difficult adjustments at this time, to address our current reality and to prepare the company for success in the future, a future that looks very different than our business today."

Certainly, Ms. Powell is correct that the future be will be very different from today. The problem is, no one knows exactly what it will look like. We can anticipate some changes, such as continued loss in sales of hard copies to electronic ones, but who could have foreseen this five years ago? We can predict based on trends we see, but technological changes represent hard to anticipate breakthroughs that can totally change the paradigm. Will there be more technological advances in the book field in the years ahead comparable to the development of the electronic reader? Undoubtedly.

What we can logically predict is the number of copies of printed books produced will continue to decline, perhaps at an accelerating rate. There will be fewer copies printed of future important books, fewer copies available for collectors. That part of the equation doesn't sound bad for those in the book trade. However, the other half of the equation is will future generations, particularly those who grew up reading electronic copies, have an interest in collecting printed editions? This question applies not only to books published in the future, but to all of those from the past lining our shelves. Whoever knows the answer to this question probably knows what the future holds in store for the book trade.

Perhaps the question is even larger than books. What (if anything) will people of the future collect as more "things" become electronic? Will people who love books be content with having a large electronic library, or will they want something they can touch? You might be able to build an interesting collection of electronic books in your field, but there is no rarity, no exclusivity in that. It can be duplicated with a click of a mouse. Will such ease of duplication dissuade or encourage collecting, and if it dissuades it, will people look for physical copies to collect or simply not collect books at all?

This question may depend on to what extent people see books as physical things. Records, tapes, even CDs went through this change sooner than books. Some people do collect old records, and vinyl is still produced in small quantities, but this does not appear to be a particularly vibrant field. Some people do appreciate old album art and plastic disks, but to most these seem to be simply older means of conveying sound, rather than something to be appreciated in themselves. On the other hand, you can now get digital art, electronic screens one can hang on the wall with a work of art - even the Mona Lisa if you so desire. The reproduction may be good, but I have seen little evidence that such electronic art is making serious inroads on the collecting of physical paintings. Where do books fall in this line between music and paintings, appreciated as physical objects or not so much appreciated? I don't know, though it will probably determine the long-term value of those bound volumes of paper currently resting on our shelves. The collectibility may rest on something as simple as ability to display. Paintings can be displayed fully on the wall, records, with their narrow spines, barely at all. Books on a shelf fall somewhere in between.