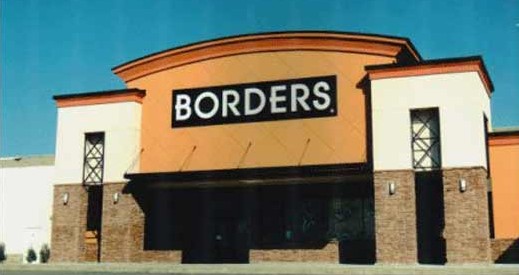 Two major stories have come out of America's second largest chain of bookstores, and while the two are technically unrelated, they are very intertwined. A few weeks ago, Borders announced that they were breaking the $100 barrier on electronic readers, offering a version of the Kobo e-reader for $99. Then, on February 16, just a short time later, Borders announced that they were seeking bankruptcy protection. The chain that has been in retreat for the past several years plans to close another 30% of its stores. Whether this can salvage its dying model is unknown, but I wouldn't want to bet much money on them. Ten years ago, when I lived close to a Borders, I used to regularly roam their isles. It was a wonderful place. Today, having drifted behind the times, it desperately searches for relevance.

Borders has made many poor choices over the years, explaining its weak standing versus the top bricks and mortar bookseller, Barnes and Noble, though it too struggles mightily. Fifteen year ago, Borders purchased Waldenbooks, once the leading bookstore chain, but whose smaller, mall-based stores has been a faster declining model than the Barnes and Noble/Borders superstore model. They expanded into selling CDs and DVDs just as those markets were about to slide into their own sharp declines. Borders was slow to respond to Amazon, slow to get into online selling, slow to get into electronic readers. They are barely more than an afterthought in online selling and electronic books today, the growth area of the past decade. Their situation would have been tough even if they made the best moves. Making the wrong ones only assured disaster.

According to their Chapter 11 bankruptcy filing, Borders operates 642 stores under its Borders and Waldenbooks names, 639 in the U.S. and 3 in Puerto Rico. They have 6,100 full-time employees, 11,400 part-timers. With 30% of the stores closing (lists have been released), a great many will be losing their jobs. Its stock price, as high as $37 in the 1990s, and still over $3 within the last year, dropped to just pennies. It may well prove to be worthless. Their filing showed a long list of unsecured creditors who will hold preference over the shareholders even after secured debt is repaid. The unsecureds are primarily publishers, headed up by Penguin Putnam, owed $41 million, Hachette at $37 million, Simon & Schuster at $34 million, Random House at $33 million, and Harper Collins at $26 million.

The other recent news from Borders was the introduction of a $99 electronic reader produced by Kobo. It made Borders the first major bookstore, bricks and mortar or online, to break the $100 price point on e-readers. It is a significant moment, in our opinion. It virtually wipes away cost as an element in choosing whether to go electronic. Considering the price of new books, generally in the $15-$20 range, and the savings per book in buying electronic copies, it is hard to imagine that any significant number of readers will be dissuaded from choosing electronic books because of the $99 price. Cost, essentially, becomes a non-issue. Borders, in effect, has issued the coup de grace in a process that has virtually destroyed it. Oh the irony.

Even $99 is not likely the end. Prices for electronic readers will probably inch down a bit more, or they will come with credits for book buying, as they are used to steer buyers into purchasing their books from a particular source. Most electronic readers (other than Kindles) are open source, meaning they can be used to read books purchased from multiple vendors. This is true of Borders' Kobo, meaning there is no guarantee that selling these cheap readers will add to Borders' ability to sell more electronic books.

Elsewhere in this issue of AE Monthly is an article on Powell's Books, and their layoff of employees, attributed primarily to the growth of electronic readers. In that article, we speculate on what this may mean to sellers of collectible books. Borders and Powell's tell us that electronic readers are devastating to the selling of new physical books, but what is less clear is whether a generation raised on electronic readers will still be interested in collecting physical books in the years ahead, understanding that a collection of electronic ones is, at best, an ephemeral pursuit. This is a major question, but I don't know the answer.

A dozen years ago, I was a regular visitor to my local Borders. It was a welcoming environment - comfortable chairs to read their books with no obligation, get a cup of coffee, and even, on weekends, listen to a live band. I would go to their travel section to plan my summer trips. I know what you're thinking - I was leeching off of their free access to information. No wonder they went broke! Borders was sort of like the internet before the internet - a resource for free information, but in a comfortable, even social environment. And, I wasn't totally a leech. When I did need to buy a book or something Borders sold, I bought it there, rather than searching around for a better price. I felt I owed it to them.

There is a Barnes & Noble close to me today, but I don't go there very often anymore. I now conduct my "research" online, just like so many people buy all of their books online. I miss Borders but in the same sense I miss the Main Street shop. I am a bit nostalgic, but I don't go there anymore. Times change. Convenience, price, predictability carry the day, even though we realize we have lost something that is hard to quantify. I hope Borders finds a way to overcome its great challenges and survives. I wouldn't bet on it.