Library and Institution Acquisitions - Some tips for booksellers 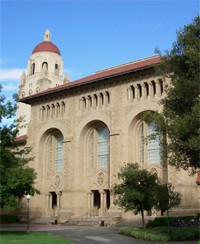 The library at Stanford University.

A few months ago, I got a query from an East Coast library wanting a particularly expensive art book that I had in my inventory.  I replied that I had it, they bought it without quibbling at the price, and I sent it off to its new home.  I often get queries from libraries and historical societies on the books in my store - usually very scarce or hard-to-find things – the last being last month; Feeding the Lions, An Algonquin Cookbook.  It was a signed first from 1942 and in very nice condition with just minor bumping and a slightly disheveled, but very good dust jacket.  Up until that time, I had not really given much thought to selling to libraries or other organizations.

I am asked with some regularity to appraise books for the local State Archives and in return they occasionally buy local and western history volumes from me, which is my specialty.

This set me to wondering if that might be a good source for me, which, in turn, set me to inquiring about the process of how these libraries and other institutions, such as our local Historical Society, acquire their books.  I didn’t think they just got online to Amazon and ABE, though sometimes, I found out, they do.  I called a few of the people in the various institutions with whom I have worked from time to time, but it had a domino effect in that I now have a whole bunch of information about different organizations and institutions from Nevada to California to New Mexico.  They generously imparted information on what they are looking for and how they go about buying.

First, let me just say, everyone I talked with said that they really try to get rare or antiquarian books donated rather than buying them.  This, of course, is very sensible.  Second, most libraries have quite extensive collections of books and are very, very particular about what they buy and about the condition of the books.  They don’t call them “special” collections for nothing, you know.

Let’s start with the big kids and work down.  I talked at some length with Zachary Baker, the Assistant University Librarian for the Collection Development at Stanford University in Palo Alto, California.  I talked to them because I do a lot of book buying at the Palo Alto FOL Store.

Baker is the Curator of Judaica and Hebraica in addition to his other duties.  He noted that because Stanford is a very large research library, differing from small colleges or public libraries, they collect across a vast array of disciplines on a very large scale.  They collect current publications retrospectively, and also volumes that appear in traditional printed form as well as in electronic and other formats.  They have hundreds of vendors in their data bases with whom they deal.

Professor Baker buys antiquarian books for his Judaica and Hebraica collection, and his other colleagues do the same for their specialties, as well.  They have a lot of specialized bibliographers and curators whose fields of expertise run the gamut from philosophy to African studies, to economics, polyscience, history, literature, etc., and each has a range of dealers with whom they do business.  Some are exclusive to the fields in which they deal and some have a large range of materials.  They can be people who do business out of their apartments and shops or they may be large distributors – “For example,” said Baker, “a fellow in Berlin who I met at an antiquarian book fair and whose catalogues I’ve been receiving for some time.  I look through and I ask if certain books are available then order what we want.”

Then I went to the two much, much smaller local libraries near where we live; the Washoe County Library in Reno and the Nevada Historical Society in Reno.  Their systems are very much like most small library systems all around the country.