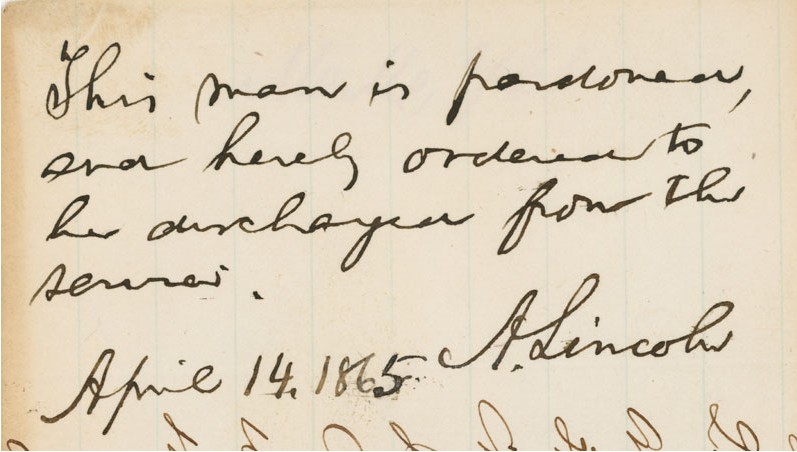 A forgery on a Lincoln document came to light last month twelve years after the document's "discovery" in 1998. The forgery does not alter history in any major way, nor will it change our view of a man many consider America's greatest president. What it does throw light on is an amateur historian's apparent attempt to build a reputation for himself at the expense of historical accuracy, with countless people being fooled by the details if not the substance. Many may see this incident as a tempest in a teapot, but for those who believe in the sanctity of historical accuracy and truth, this incident is a painful reminder of how easily history can be distorted when people willfully deceive to advance their own interests.

The document was a pardon Lincoln signed for an army deserter, one Patrick Murphy of California. He had been convicted in a court-martial and sentenced to be shot. It was also apparent that Murphy suffered from mental illness, and the mentally ill were generally discharged from service rather than shot. President Lincoln agreed with this procedure, so on Private Murphy's appeal he wrote, "This man is pardoned and hereby ordered to be discharged from the service." He then added his customary "A Lincoln" signature. There was nothing very unusual here, and the forgery was small, a simple change in one number, a "4" partly erased with a "5" superimposed on top.

That changed digit appeared in the date. What had originally been dated April 14, 1864, was changed to read April 14, 1865. That change seems insignificant until you remember what happened on that day, April 14, 1865. That was the day Lincoln was assassinated as he watched a play in Ford's Theater. This would make it one of the last, if not the last order Lincoln ever signed. A change in one digit converted this from a routine, ordinary document, to one of historical significance. Indeed, after its "discovery," the document became part of several Lincoln exhibitions, a final piece to one of the greatest careers in American history.

Why would someone have made this forgery? Certainly it would have greatly increased the value of this otherwise ordinary document, but no one stood to make a financial gain. The document belonged then and now to the National Archives, which has no intention of ever selling it. The answer is that it brought great recognition to its finder, an amateur historian from Virginia named Thomas Lowry. Lowry spent time pouring over Lincoln documents at the National Archives, but his amateur status left him in obscurity in Lincoln circles. However, with the "discovery" of what might have been the last order Lincoln ever signed, he became a celebrity in the field, even if the rest of us who don't study Lincolniana in such detail never heard of him. He became a big fish in a small pond, recognized for his finding something of importance in his research. He then went on to author a couple of books about Lincoln.

After several years on exhibition, one of the archivists for the National Archives, Trevor Plante, noticed something odd about the date. The number "5" seemed to be in a slightly darker ink than the "186." There also appeared to be shades of something else underneath the "5." That led to some more digging and the determination that Murphy had not been pardoned on the day Lincoln was assassinated, but exactly one year prior to that date. That in turn led to an interview with Mr. Lowry and a confession on January 12, 2011, that he had taken a fountain pen into the archives and altered the date. Mr. Lowry has since recanted his confession, saying he was pressured into it, and that someone else had made the change. The National Archives are not buying into this story. Mr. Lowry is safe from prosecution as the Statute of Limitations on the crime has expired. However, the 78-year-old accused forger has been permanently banned from all facilities of the National Archives.

Some people considered this pardon on the last day of his life a sign of Lincoln's humanity. Actually, the date would only have mattered if Lincoln had known this would be the last day of his life, which obviously he did not. Nonetheless, as anyone with only a passing familiarity with the man already knows, he had a deep streak of compassion and humanity. He was a fierce leader in the Civil War, a man so dedicated to preserving the Union that he was willing to do whatever was necessary to prevent its dissolution, though he knew it would result in great human sacrifice. Still, his presidency is filled with pardons such as this. He had no desire to punish, and fully understood the pressures of army life. He was quick to forgive transgressions, while being unbendingly determined to preserve the Union. Regardless of the date, this pardon is a display of the great leader's compassion. He died way too soon.