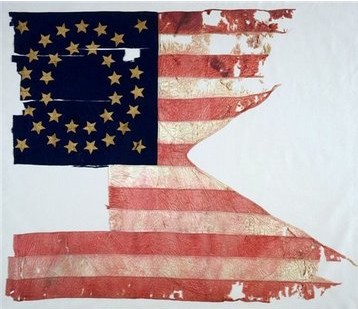 Custer's flag is not well, but it is a survivor.

9.  An anonymous leaflet published in 1509 which is the first book to officially use the name "America" to describe the New World. $796,770.

5.  Comedies, Histories, & Tragedies by William Shakespeare, better known as the First Folio, published in 1623. Undoubtedly the most important work of English literature. $2,315,273.

4.  The Rochefoucauld Grail, three-volume French illuminated manuscript circa 1315-23, the fundamental medieval work on the Holy Grail. $3,700,802.

3.  A copy of the Emancipation Proclamation, signed by Abraham Lincoln, provenance of Robert F. Kennedy. $3,778,500.

2.  Sports trumps it all. The original typed, signed rules to the game of basketball as written by the game's founder, James Naismith, at one time posted in his Springfield, Massachusetts, gym. $4,338,500.

1.  This book was already known as the most expensive printed book in the world when it came up for auction at Sotheby's on December 7, 2010. It earned that reputation ten years earlier when a copy sold at Christie's for what was still a record price for a printed work - $8,802,500. Sotheby's placed an estimate of roughly $6.25-$9.4 million on it. The book did not disappoint. Number 1 goes to a first edition of what is perhaps also the greatest illustrated book, the double elephant folio of John James Audubon's Birds of America, from the 1830s. This one hammered down at $11,321,215, thereby setting a new record for the most expensive printed book.

You may view the entire AE Top 500 by clicking this link.

Should I stay or should I go:  Compiling a list of the top 500 books, manuscripts and related ephemera is not quite as easy as it sounds. Some items work the margins. A book of artwork is in, but how about a portfolio? A print? A photograph? An illustration? How about an illustration that was used in a book? A cartoon? A poster?

We have generally chosen to include items around the margins that were intended to provide informative or literary content, while leaving out those that are more of artistic merit. Single illustrations from Audubon's Birds of America portfolio (intended for binding) are in. Pierre-Joseph Redoute watercolors (there were a bunch that qualified financially) were left out, though a copy of his book, Les Liliacees, is in. We have left out photographs, though there were some historic ones, unless part of a book or album. That meant leaving out many of historic merit, including several daguerreotypes from the early 1840s (the dawn of photography) by Girault de Prangey, signed photographs of Lincoln ($103,000) and Kit Carson ($66,225), and an early daguerreotype of Seneca Indian teacher and later aide to General Ulysses Grant, Caroline Parker ($62,500). We did include an early photograph of Proust since he is known as an author.

There are a few others we would have liked to include, but they just went too far afield. A Christie's Books & Manuscripts auction included a circa 1900 street sign for the intersection of Wall Street and Broad in New York City ($116,500). There was a Union Jack carried by Robert Falcon Scott on his ill-fated trip to the South Pole in a travels auction ($113,270). We really debated over this one - one of the pens President Lincoln used to sign the Emancipation Proclamation ($74,500). Finally, on December 10, Sotheby's held three single-lot auctions. One is #2 on the list, Naismith's basketball rules, another, #3, is Lincoln's Emancipation Proclamation. This item is a symbol of one of the most written about episodes in American history, and would have been #6 ($2,210,500) but did not quite qualify. It is the one guidon (flag) not captured by the Indians that Custer carried into his famous, and final, last stand. It is tattered and worn, with pieces missing, but unlike Custer and his men, it was a survivor.