In The News:  A Terrible Crime, a Book Thief's Book, and Carl Crawford's Bookstore. 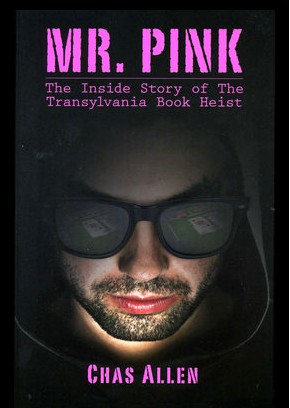 A terrible story came out of Salt Lake City a few weeks ago of the street dangers rarely experienced in the book trade. Respected bookseller Sherry Black was brutally murdered in her store, in a case that is still unresolved at this time. Mrs. Black was reportedly beaten and stabbed several times, with extensive blood loss at the scene. Several books were reportedly stolen, but the level of violence displayed in the killing suggests that perhaps this was more than a simple theft gone awry.

The killing gathered even more local attention because Mrs. Black was the mother-in-law of one of Salt Lake City's more prominent citizens. Her son-in-law is Greg Miller, CEO of the Larry H. Miller Group. This firm is the owner of the Utah Jazz, Salt Lake City's NBA basketball team, the city's only major league professional sports team. A moment of silence was held before one of the team's recent games in her memory.

While no suspects have been named, there apparently has been an investigation relating to an incident last year when she unknowingly purchased some stolen books. Mormon books are among the most highly collectible of works, and these had been stolen from the library of one of the leaders of an offshoot of the larger Church of Latter Day Saints. The books had been stolen by the owner's son, who sold them to Mrs. Black. The son had reportedly threatened violence to his father, saying he was a member of a gang which would exact retribution if he pressed charges. Mrs. Black returned the books once she learned of the source, but it appears police believe there may be a connection between this incident and her murder.

Criminals sometimes get two chances to profit from their crimes:  once when they steal the goods, the second time when they write the book. Charles Allen, one of the four participants in the Transylvania book heist, has published a book detailing his recollections of the planning, execution, and aftermath of the incident. Mr. Allen and three other college students pulled off a heist of books at the Transylvania University Library in Kentucky a few years back. They took some valuable books, although the taking of some incomplete sets indicated an at best limited understanding of book collecting. They did themselves no favors by resorting to an assault on the librarian, zapping her with stun gun to keep her quiet (in court, they argued it was just a stun "pen," an attempt to minimize the assault that fell on deaf ears).

Their next step was to attempt to sell the books to Christie's in New York. Apparently they believed Christie's would not be suspicious of a few young men with no knowledge of rare books trying to sell them some Audubons. They were wrong. Having used one of the participants email address to contact the auction house, it was easy to track them down. The men were convicted and Allen was sentenced to 87 months in prison. He is still serving that sentence. He sent notes out to his brother who compiled this self-published book.

The title of the book is Mr. Pink. The thieves used colors for their code names. It appears to be available in a few stores in Kentucky and is also be hawked on the internet. Perhaps he will one day sell the rights for a made-for-TV movie, though I hope not. One does not want to see them profiting in any way for their behavior, but wishes them well if, after they have served their times, they put all of this behind them and change their lives, rather than attempting to profit from their sordid past.

One of the stranger stories hit the newswires last month, though alas, it all proved to be fiction. A blogger on the website of the Kansas City Royals reported that Carl Crawford, newly signed outfielder of the Boston Red Sox, was planning on opening an antiquarian bookshop in his new home. Crawford was depicted as being a collector of early Americana, Plymouth, Puritans and such, and now had the money to realize his lifelong dream of running a bookstore. Certainly Mr. Crawford would be able to absorb the losses that generally come with bookselling as his contract with the Red Sox called for him to be paid $142 million. Not even a bookshop could lose that much very easily.

The story hit the newswires, a heartwarming piece for those who love old books. Here was a wealthy baseball player who appreciated books too, an incongruous, too good to be true piece of news. Of course, it was. However, Mr. Crawford apparently aided the hoax when it first came out by posting a "tweet" saying that yes, he was going to open such a store. Anyone who has just been paid $142 million is likely to be in a happy, jocular mood. Still, the entire story was a joke, and it is hard to see why several legitimate news sources fell for it. All of the articles quoted the original blog from the Kansas City Royals website. That this site would get a scoop should have raised red flags, particularly when the story was so hard to believe. The Kansas City Royals have as little to do with Mr. Crawford as they do with winning baseball games. His previous address was Tampa, not Kansas City. The blog writer has since admitted it was a joke, and Crawford can be expected to dedicate the next seven years (the length of his contract) to playing baseball. After that, maybe, just maybe…