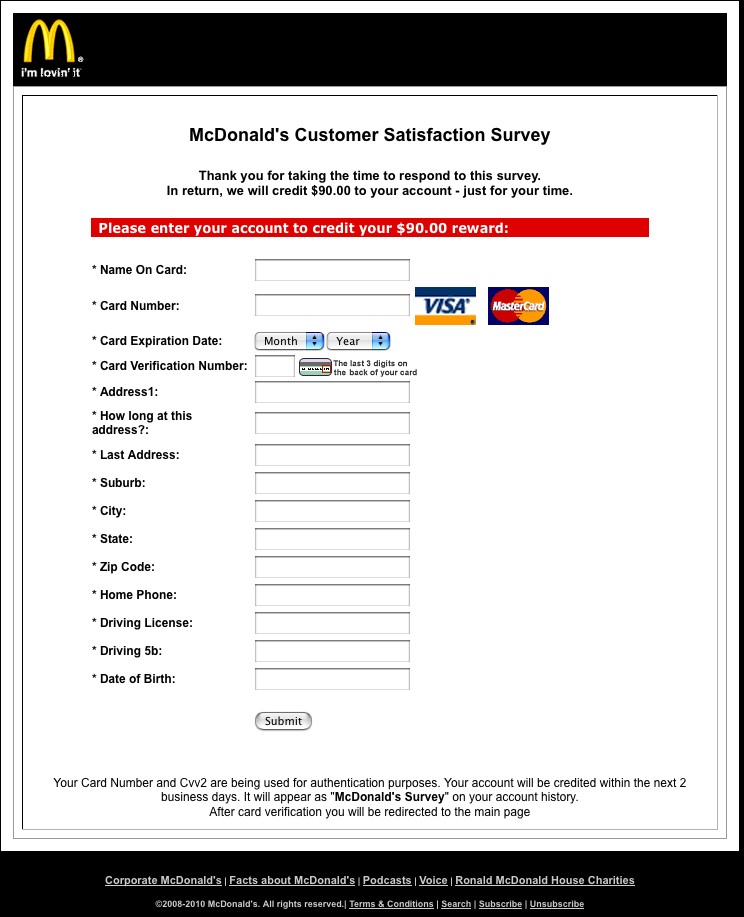 It would seem that few people believe the email from Nigeria about the General's widow who wants to share his $20 million in ill-begotten funds in return for your bank account number. I doubt that many people believe the supposed urgent message from the American tourist in the Spanish airport who desperately needs some money to get home. I don't think many men even believe those Russian women who saw their profile online and fell desperately in love with them are real either. No, not even those refunds the IRS supposedly wants to send fools us any more. Same goes for the Microsoft lottery you just won. We have become inured to these phony appeals by their overuse. However, once in a while, someone thinks up a new one, so you need to be vigilant. Here is a new one that might appear reasonable at first, but watch out. If you think before you act, you will see right through it. If you don't always do your thinking and acting in that order, here's a heads up.

This email supposedly comes from McDonald's. It was addressed "Dear Customer," which made me wonder as I have not eaten at McDonald's since I became old enough to be concerned about my health. Nonetheless, probably 75% of the world's population eats there and would not be thrown off by this claim. I could see where McDonald's might just assume everyone was their customer. All they wanted was for me to fill out a survey. This wasn't terribly suspicious as I get asked for these all of the time, though usually it follows a recent purchase.

The email reassured me by stating, "Please be aware that we will not ask you about any personal information." Well, maybe not entirely reassured me. I would have expected someone whose first language was English to say they wouldn't ask me for any personal information, rather than about it, but these days many native English speakers don't speak like it is their first language either, so we can let this go. The next part, however, really made me wonder. I thought maybe they'd give me a free hamburger or a shake for participating. This is the standard fare for filling out surveys such as this. Instead, "McDonald's" offered me $90 for answering a very simple questionnaire. McDonald's didn't become rich giving away money at that clip. This seemed too good to be true.

Nevertheless, I filled out their survey. I told them how much I liked their food and their drinks, that their service was wonderful, not that I knew any of this to be true. I think you're supposed to fill out surveys by telling the takers what they want to hear, no? Still, this nagging thought remained. How were they going to get me my money without asking for any personal information? Would I get a print-out coupon for $90? That seemed unlikely. Who spends $90 at one time at McDonald's? Could anyone eat 45 McDonald's hamburgers and 45 bags of french fries and live to tell about it? I finished the survey and clicked submit anyway.

Ordinarily, I would not recommend doing this. I certainly wouldn't take the chance of hitting a "submit" button on a questionable site with a Windows based computer. That's an act of crash-defying bravery, or more likely, stupidity. Fortunately, my Mac computer is good at fending off such attacks, and I figured I could save others with comparable curiosity but more vulnerable computers from damage by playing the role of guinea pig. That's what writers are supposed to do. So here's what I found. Now you don't have to risk you're computer to find the answer.

What appeared after I clicked "submit" was a form to claim my $90. "McDonald's" would credit the $90 to my credit card. All I had to do to receive my money was give them my credit card number, its expiration date, verification code from the back, my address, how long I had lived there, home phone number, date of birth and driver's license number. Fortunately, they didn't ask for anything "personal." If they'd asked about my bathing habits, sexual orientation, or affinity for whips and chains, I would have become really suspicious. No, they just wanted the basic information necessary to run up a bunch of charges on my credit card. As the Godfather would say, "nothing personal, just business."

They also asked for my "Driving 5b." Even after some online research, I have no idea what that is. Another request was for my "suburb" as part of my address. This may be a normal request in the country from which this "survey" originated, but it is not part of a written address in America.

You have been forewarned. If you receive a survey from McDonald's, or anyone else you have not communicated with, or you receive an online survey from anyone that requires personal information, in particular a credit card or bank account number, click "delete." They are not going to put money in your account. The cash will flow in the opposite direction.