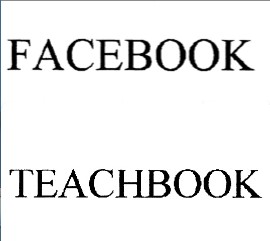 Teachbook is facing a lawsuit.

Has Facebook co-opted the exclusive right to use the word "book" in a business name? To some extent, a lawsuit they recently filed against start-up website Teachbook may lead some to think so. Such a claim might be cause for concern among booksellers, since a large percentage of those in the book trade use the word "book" in their name! Will the Community Bookstore have to change its name to the Community Works-on-Paper Store, or the ghastly Community Electronic Readers Store? Fear not. Perhaps if former Pittsburgh Pirate pitching great Elroy Face decided to open a bookstore and called it Face Books he might hear from their corporate lawyers, but as long as you run a bookstore, you should be all right. Just don't try to convert it into a social networking site unless you're prepared to run up some astronomical legal fees.

The case involves start up Teachbook, intended to be an online community for teachers, apparently at one point indicating it would enable teachers to converse where schools blocked access to Facebook on their servers. Now it doesn't take a genius to imagine that the founders of Teachbook were making a play on the Facebook name. It is reminiscent of the Facebook name, which stands for a social community, while cleverly employing that part of the name, "book," associated with teaching ("Faceteach" would have been an awful name). There's little doubt that they were using the name for its familiarity value, just as any business that sticks an "R Us" after its name does.

Facebook seized on the obvious in its legal complaint stating "Teachbook.com LLC rides on the coattails of the fame and enormous goodwill of the FACEBOOK trademark, misappropriating the distinctive BOOK portion of Facebook's trademark. Defendant has created its own competing online networking community in a blatant attempt to become Facebook 'for Teachers.''' Just in case you weren't sufficiently enamored by Facebook, they inform us that "Facebook...is dedicated to making the web more social, personalized, smarter and relevant." Smarter? Kids don't read any more because they are too busy posting inane comments on Facebook. This lawsuit should be thrown out for perjury on its "face."

Actually, there is some reason behind all of the self-congratulations. What was traditionally required to win a trademark case, establishing confusion in the marketplace, is not clear in this case. Will people assume Teachbook is associated with Facebook? I wouldn't. However, Facebook's case may be stronger on its claim of "dilution." Dilution is a more recent legislated cause that allows for an action such as this even if people are not confused into thinking the new company is the same as the old. Dilution can arise when there is a "lessening of the capacity of a famous mark to identify and distinguish goods or services," even if there is no deception, confusion among brands, or competition between them. This is a less demanding standard than showing actual confusion, and appears to us to be their best shot. However, for dilution, unlike traditional infringement, the holder must not only have a trademarked name, it must establish that its name is widely known in commerce. Hence, all of the self-congratulatory talk.

So, why shouldn't booksellers be afraid? The answer is that trying to trademark a term so generic as "book" is absurd. It can only be trademarked in a particular context. As Facebook states in its pleadings, "If others could freely use 'generic plus BOOK' marks for online networking services targeted to that particular generic category of individuals, the suffix BOOK could become a generic term for 'online community/networking services' or 'social networking services.' That would dilute the distinctiveness of the FACEBOOK Marks..." In other words, if you use "CommunityBook" as your store name, or even for your bookselling website, Facebook isn't going to bother you. However, if you decide to start an online social community to discuss books and call it CommunityBook, you may hear from their lawyers. Call it something else.

Now for a final piece of data gleaned from their lawsuit. Facebook informs us that "users spend more than 700 billion minutes per month" on their site. That's 11.66 billion hours, or figuring an average worker makes $15/hour, $175 billion worth of time each month. Over the course of a year, that's over $2 trillion worth of wasted time. If people donated this time to the government instead of Facebook, we could eliminate the national deficit and save Social Security and Medicare. If we spent that time building windmills, instead of tilting at them, we could solve the energy crisis. If only... but of course we never will.