Libraries: <i>The Rumors of My Death have been Greatly Exaggerated</i> 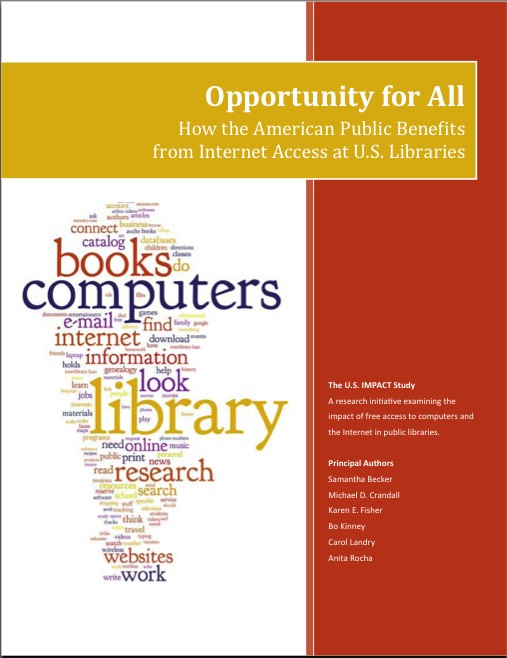 Opportunity For All study shows surprising use of internet access at libraries.

Libraries would appear to be a threatened species, if you read the news. A 24-hour vigil was recently held at City Hall in Newark, New Jersey, to protest the closing of two branches and seriously reduced hours at others. Downstate in Camden, officials were debating whether to close one of their two remaining branches. Services in Long Beach, California, were recently spared reductions only after private contributions were offered, but libraries in Oregon that were severely cut after the loss of timber production revenues a few year back are again under assault. In Pasco County, Florida (Dade City), one branch was saved by reducing hours at the others.

Two factors have come into play to make this a difficult time for these cultural and educational institutions that thrived for a century in America after Andrew Carnegie made it his goal to cover the nation with local libraries. One is the difficult economic times that have impacted some of us financially, and others, still employed but fearful, psychologically. If the President, his economic advisers, Congress and the Federal Reserve are all struggling to rectify this situation, there's not much librarians can do to solve it.

The other factor is public perception of libraries as outdated, unused repositories of old technology. These are perceptions held primarily by those who don't use libraries. The reality is that while some may be dragging their feet, there are major changes going on in most libraries. Like us, they are feeling their way into the new world of technology, and their role in providing us with information, education, and entertainment is as crucial for many today as it was in Carnegie's time. Surviving this period of budget cuts is critical as libraries, which not long ago had all of the attributes of dinosaurs, are reviving their essential roles in the life of our communities.

Libraries around the nation have been making use of grants funded through the Library Services and Technology Act, passed in 1996, to upgrade their services to better serve people in the digital age. This act replaced an earlier one that had been focused more on providing aid for construction of physical space. In Georgetown County, South Carolina, the local library made use of these funds to purchase Kindle electronic readers. They bought 25 of them, which people can use at the library to read books (the Kindles are not available for check out). While that may not sound entirely convenient, the program is enabling people to learn how to use these devices. Additionally, with Georgetown being a rural and not wealthy county, many of its residents are not in a position to buy electronic readers or the books to be downloaded on them.

In Hartford, a grant is being used by the library to offer instruction in art and writing for people aged 55 and up. This may not be high technology, but it is drawing people into the library by offering services not likely to be found elsewhere. The Sayre Public Library in Pennsylvania is using these funds to offer computer instruction to people middle aged and up. In Carson City, Nevada, they used grant funds to purchase a radio frequency check out system. It has freed up personnel who used to check out books by hand to provide more help to patrons, and allowed the library to extend its hours, even with fewer employees. In Sevier County, Tennessee, grant funds were used to provide video gaming. That may not sound like a literary use, but it is bringing young people into the library, and by offering games suitable for intergenerational use, it may help bring diverse age groups together. The list goes on...