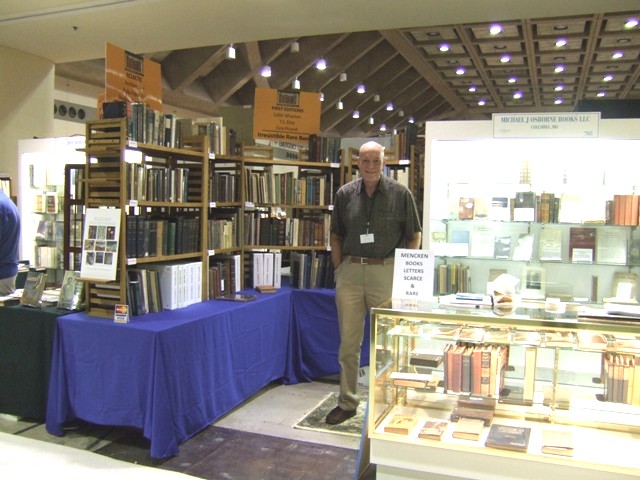 The Baltimore show is billed as the largest antiques show in the country and it attracts an international assortment of dealers and collectors from Asia, Europe and the Middle East. With the gate count usually in the tens of thousands dealers anticipate good crowds and serious collectors. Once in a while a tourist wanders in and is overwhelmed by aisle after white-carpeted aisle of booths where everything is for sale: books, fine art, antiquities, silver, jewelry, oriental rugs, and sculpture.

The show held on the lower level of the convention center stretched for two city blocks. It was on such a grand scale that it took more than one day to see it all and it wasn't uncommon to see people in battery powered carts cruising up and down the aisles.

The antiquarian book dealers were nestled together near the west end of the center under lower ceilings with decent lighting for better viewing of books. In the book section visitors found fine bindings, rare printings, hand-colored plates, fore-edge paintings, first editions, rare editions, interesting ephemera and scarce titles and just good books in a variety of subjects.

The book dealers were the last to move in due to the location of the antiquarian section. During the morning of September 1st you could drive your vehicle, if you were lucky and early enough, up to your booth and unload quickly before parking offsite. Otherwise you were able to park nearby to dolly to your booth, then park offsite. What appeared to be chaos with shelving and boxes and people finding their allocated space was actually well managed by the Palm Beach Show Group whose staff assisted with details. Book dealers had a full day on Wednesday to move to and set up their booths until all the carpeting was laid, and all the vehicles removed and the remaining space filled in with a restaurant.

This show was good for pre-show buying. It wasn't unusual to find one or more dealers dropping by your booth while you set up, scanning your shelves, and returning again and again scouting well into Wednesday evening of the set up day. Business cards appeared from dealers' pockets and were placed with books to be put aside and purchased later.

My display, Michael J. Osborne Books, was located in booth 705. This was my seventh year at the BABF. I occupied a double booth that opened to a spacious aisle and plaza-like eating area where coffee and snacks were served. Although I specialize in city planning, landscape architecture, architecture, Marylandia, Washingtoniana, and what I like to call irresistible rare books, this year I brought books on the Civil War, and fine printing and press books in addition to my usual fare.

My top single sale was a non-book item, a deck of twenty alphabet cards in Cyrillic, printed in 1848 in Moscow, complete, with their case and with hand-colored illustrations of peddlers. The most expensive book I brought was Edith Wharton's The Book of the Homeless, one of fifty deluxe copies with the extra suite of plates.

The plaza area is also home to Jerry Showalter, Royal Books, Drusilla's Books, Griffon’s Medieval Manuscripts, Jeff Bergman, First Folio and Book Worm and Silver Fish. Drusilla Jones brought rare and choice children's books and literature, and her neighbor, Jerry Showalter brought an eclectic mix of rare and antiquarian books and ephemera, which included the first edition of Pope's Shakespeare. From my booth I could see the beautiful books displayed by Dennis Melhouse in First Folio's booth and absorb the old-antiquarian-book-shop atmosphere created by Jim Presgraves' Book Worm and Silver Fish. I could step a few feet from my booth and find fine first editions at Kevin Johnson's Royal Books and Jeff Bergman's booth.