Spectacular Auction to Include World's Most Valuable Printed Book 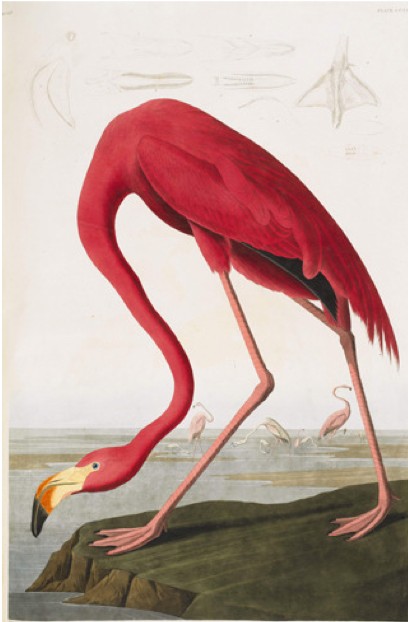 Audubon's illustrations are both art and science. Courtesy of Sotheby's.

One of the more spectacular book auctions in recent memory will take place at Sotheby's in London on December 7, 2010. It isn't a large collection, nor is it a subject-focused one. There will be just 50 lots, coming from various fields. What makes the auction spectacular is the quality of the material offered. Included among the lots are the most expensive printed book ever offered at auction and the greatest book in the history of English literature. Each is presented in superb copies. And, there is more.

Offered is material from the collection of Frederick, 2nd Lord (Baron) Hesketh. Lord Hesketh participated in what Sotheby's calls "high spot collecting." Rather than focusing on a particular field, he collected the very best material available. It would probably be impossible to collect such impressive high spots today (unless you buy this entire collection), but Hesketh purchased his books in an era when such material was still possible to find. Born in 1916, his collecting ended in 1955 when the English Baron died at the age of 39.

Lord Hesketh had come by his fortune the old-fashioned way - he inherited it. If he engaged in activities beyond those of good deeds and similar actions expected of a man of wealth it is not obvious. Hesketh had come from a long line of baronets, dating to the 18th century. However, this only partly accounts for his wealth. Despite his very British pedigree, much of his fortune was American in origin. He was the great-grandson of John Breckenridge, Vice-President under James Buchanan, Southern Democratic candidate for President in 1860, and a General and Secretary of War for the Confederacy. The serious American money, though, came more from his grandfather William Tevis, a wealthy industrialist with interests in mining, railroads, telegraphs lines, and a controlling share of Wells Fargo. One of his daughters went off to England and married the first Lord Hesketh.

While the second Lord Hesketh, original owner of this collection, died in 1955, his wife, Lady Christian Hesketh, survived him by over half a century. This explains why it has taken so long for the collection from the estate of a man who died in 1955 to come to auction. Lady Hesketh died in 2006, and later that year, their son, Alexander, third Lord Hesketh, deposited the collection with Lancaster University for safekeeping. The third lord appears to have differing interests from his father, having invested over the years in automobile racing, among other things, rather than books. He single-handedly financed a Formula One racing team in the 1970s, eschewing the corporate sponsorships his competitors used to fund their ventures. Some of his activities have been less than profitable, though undoubtedly his most costly enterprise has been keeping up the family's enormous estate. In 2005, he auctioned off artwork from his house for $15 million, and the following year put up part of his land and manor house for sale for $28 million. This sale likely is another step in converting assets to cash. While reality has forced many of old wealth to sell off some of their assets, it appears that the slightly eccentric and likeable Alexander Hesketh has lost none of the good humor he displayed in putting together his unconventional racing team. He seems unlikely to mourn giving up the collection all that much.

The pièce de résistance of this magnificent collection is a first edition, double elephant folio copy of John James Audubon's Birds of America. This masterpiece, perhaps the greatest illustrated work ever, was produced by naturalist-ornithologist Audubon during the 1830s. The unusually large, colored illustrations are works of art, though Audubon was primarily concerned with acquainting his readers with these species. While this is one of the greatest works ever printed, it was not a financial success for its creator. It was so costly to produce, and therefore expensive to buy, that he was unable to sell enough copies to make a profit. Audubon responded by producing his smaller, more affordable octavo edition of the Birds of America, which became a success financially. This book holds the record highest price for a printed work, a copy being sold at Christie's in 2000 for $8,802,500. Sotheby's describes the Hesketh copy as being in "excellent condition." The original subscriber was early English paleobiologist Henry Witham. It is copy number 11. Sotheby's has put an estimate on it of £4,000,000 - £6,000,000 (US $6,250,000 - $9,400,000). We believe the seller will not be disappointed with the price this item brings. If you hope to buy one of these elephant folios, we suggest you place your bid now as it may be a long time before another reaches the market.