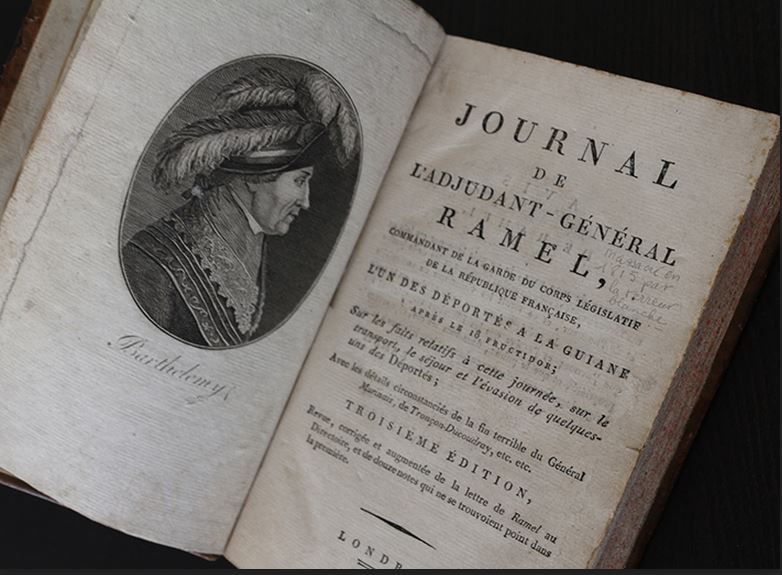 We saw in the previous article dedicated to Louis-Ange Pitou, that it had become fashionable in the aftermath of the French Revolution (1789) to deport the political prisoners to Cayenne (French Guyana). Too much blood had been shed on the guillotine, and this new punishment was also a way for the new masters of the Republic to prove they were no bloodthirsty beasts. Yet, as the famous deportee Tronçon-Ducoudray put it, Cayenne was nothing but a “dry guillotine”—and he should know, as he eventually lost his life in Guyana. Some survived, though, including a young officer by the name of Jean-Pierre Ramel, who left a worthy testimony of his short stay in hell, and of his remarkable escape: Journal de l’Adjujant-Général RAMEL, l’un des déportés à la Guyane après le 18 Fructidor (Londres, 1799). Welcome back to Cayenne!

When he was arrested following the attempted coup of Fructidor 18th (September, 4th, 1797), Jean-Pierre Ramel the younger was a young officer, who already had a long story. Born in 1768, he joined the army at 15, and quickly moved up the ladder thanks to the many wars of the period. Winds changed rapidly at the time, and he was arrested a first time in 1794 with his brother, Jean-Pierre Ramel the older. The latter, a former member of the Legislative Assembly, was murdered during the Terror (1793-1794); but our author escaped death thanks to his acquaintances. Though he fought in the army of Moreau, and denounced the royalist conspiracy led by Gabriel Bottier in 1797, he was tagged as a royalist himself after he refused to obey an order of the Directoire (1795-1799) during the attempted coup of Fructidor 18th; consequently, he was arrested. In fact, he was almost lynched. “A whole bunch jumped at me. My sword was broken; I was dragged on the ground, torn apart. The most zealous among my murderers (...) tried to plunge his sword into my chest in the middle of the confusion.” He was sent to the prison of the Temple, ending up in the cell the royal family had formerly occupied. There he met his future companions of misfortune, including Tronçon-Ducoudray, Barthelemy, Marbois, Pichegru or Lafond. These men were sent to the end of the world without being properly tried, charged or heard.

Ramel’s book is usually less expensive than Pitou’s; is it less rare? Or is it because Pitou’s book comes as a two-volumes set? Nevertheless, though less literary, Ramel’s work is as interesting as Pitou’s. In fact, these two books tell stories which are both alike and totally different. They are like two parallel journeys into the same bottomless pit. Just like Pitou, Ramel first describes his terrible journey from Paris to the port of Rochefort, where he was embarked on board of La Vaillante. Etampes, Orléans, Blois, Tours, we follow the convoy on the roads of France. Locked into an iron cage which bars hurt them painfully at every bump, the prisoners were exposed to the winds and the rain. People on their way usually blamed and mocked them; but some felt sorry for them, and even offered to help them to run away. “I don’t know what blinded us so much, and especially the members of the Conseil des Anciens; but we thought that we would have betrayed ourselves if we had tried to escape our fate.” In Saint-Maure, they were so poorly watched that they hesitated. “Some suggested to take advantage of the situation, and I was one of them,” writes Ramel. The prisoners, failing to come to a unanimous decision, stepped back into their iron cages the next day, and headed towards Rochefort.

If Ramel, or some of his companions, had ever wondered what an African slave could feel while being taken to the New World, they sure had the beginning of an answer during their journey to Cayenne. Food was so scarce, and so disgusting, that famine is not a vain word to describe what the deportees went through. “Marbois was on the deck one day, suffering so much, he couldn’t behave himself no more,” testifies Ramel. “The Captain passed by him. I’m starving, starving! shouted Marbois with a strong though distorted voice, and with sparkling eyes. I’m starving, give me some food, or throw me overboard! The Cerberus was petrified; he sent some food to Marbois.” Ramel also mentions another companion, who was shouting with hunger like a madman; they feared he would bite them! “The horrors of this famine will never stop haunting me,” concludes our author.

But their arrival to Cayenne didn’t mean the end of their misery. As soon as disembarked, they had to walk to their place of confinement, alongside the Synamary River. One inhabitant, watching them as they went past, expressed his concern: “Ah, gentlemen! You’re going down to your grave.” And this sentence certainly stroke Ramel, who had been spitting blood for a few days. They reached the fort where they were to spend their whole incarceration. “This fort, made of beams and fences, has no external work. It’s a square of roughly a hundred height gauges, with four bastions and surrounded by a wide ditch filled with the water of the nearby river, so that it is isolated,” says Ramel. Just like Pitou, he portrays the ordinary daily tortures of Guyana such as the “chiques”, or Niguas—some insects that dwell into the pores of the skin, and which “if not quickly and properly removed, multiply and reproduce so fast, you soon have no other solution but the amputation.”—, mosquitos, scorpions, and even poisonous snakes “that often sneak into the fort.” The first victim was Murinais, “a respectable old man”; then Bourdon, who also died of disease. The “dry guillotine” was at work, and the French Governor of Cayenne, when contacted by the inmates for more clemency, sent a straightforward answer: “I don’t know why these gentlemen keep on harassing me, let them know they haven’t been sent to Synamary to live forever.”

The next victim was a highly respected figure among the deportees, Tronçon-Ducoudray—or Tronsson-Ducoudray, according to the modern spelling of his name. A lawyer by trade, he had volunteered to defend Louis XVI during his trial but had been turned down—however, he defended Marie-Antoinette! Of course, he couldn’t save her, but he did participate in saving the 132 “Nantais modérés”—one of the most resounding trials of 1794. He was a great orator, and his funeral oration of Murinais moved both the prisoners and their wardens to tears: “The soldiers and the Negroes were first moved, and then so much touched, that the fort soon resounded with their wailings,” writes Ramel. Ducoudray had cunningly adapted Psalm 137, the one that goes: “By the rivers of Babylon, there we sat down, and there we wept when we remembered Zion.” Ducoudray never accepted his deportation, and apparently spent his stay there writing to the Directoire, demanding a legal act of accusation, and defending his positions. As Ramel puts it, “he was demanding some judges to the echoes of Synamary.” He died in May 1798, aged 48, after a long and painful agony, giving his friends a last piece of advice: “Run away, my friends, run away from Synamary!” It had indeed become a matter of life or death.

The tropical forest bordering the French settlements in Guyana prevented any escape by land. The only solution was to join the neighbouring Surinam (Dutch Guyana) by sea. Pichegru, Dossonville, Larue, Le Tellier, Bartholomew and Ramel made up their mind “to deprive their tyrants of the pleasure to see us dying slowly under their iron fist.” Others like Marnois, Lafond and Tronçon-Ducoudray, refused to go with them, “hiding behind their innocence, as if it wasn’t the first cause of their proscription.” They obtained some passports from a “friend” in Cayenne, whose name is cautiously withheld by Ramel—without these papers, they feared they would be arrested in Surinam, then sent back to Cayenne. Their only hope lay in a small pirogue they had spotted near the fort—but none of them knew how to steer it. Fortunately, an American Captain recently captured by a French privateer, Mr Tilly, had been brought to Cayenne—he offered the prisoners to go with them. “We showed him the pirogue, and he shivered: No, no, gentlemen, don’t you even try, you’d perish without a doubt. This pirogue is too small, and it can’t take you to Surinam.” But they had no choice. Tilly’s ship carried 40,000 bottles of wine. The take was celebrated at night and, in the morning, our deportees cunningly made their move, killing a sentinel—Ramel coyly says he was thrown into the river—, and then jumping into the pirogue and heading to the open sea. Mr Tilly couldn’t come, as he had just been transferred to Cayenne; but his lieutenant, Mr Barrick, replaced him. They took several days to reach Surinam, almost dying for want, fearing the French ships sent after them, and miraculously escaping death after being shipwrecked on the coast. The people and the governor helped them out as much as they could. There they learnt that a ship named La Décade, had reached Cayenne three days after their escape, carrying 193 deportees—including Louis-Ange Pitou. It was high time they left, and almost too late for Ramel who, on his way back to England, remained unconscious for one month because of fever and exhaustiveness. That’s where the dry guillotine brought all these men, on the edge of death.