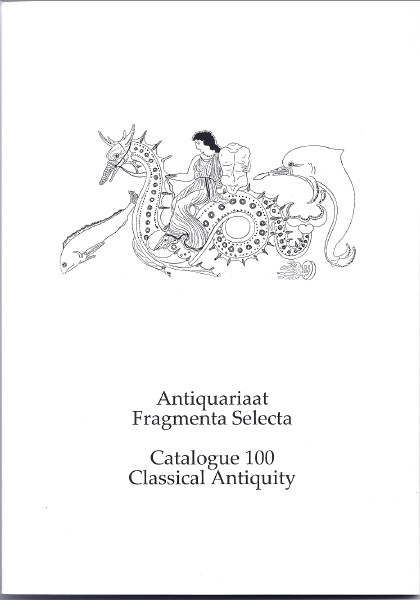 Antiquariaat Fragmenta Selecta has issued a new catalogue of Classical Antiquity. It is the first we have reviewed, though it is Catalogue 100 for this Amsterdam, the Netherlands, bookseller. Their specialty is, naturally, classical antiquity. This is the period measured in millennia, rather than centuries, ago. Many of the books pertain to ancient Greece and Rome, the Greek city-states and the Roman Empire. Throw in the somewhat more recent Byzantine period and you have covered most of the material herein.

The catalogue begins with a section devoted to the languages of ancient times. It then moves to more general topics, including works by many of the great Greek philosophers and writers. Obviously, these are not books published during the times covered. Those times all preceded Gutenberg and his press. However, you will learn much about these ancient times in the books offered. They come in several languages, including Greek, Latin, Dutch, French and English. There is no shortage of titles available. Antiquariaat Fragmenta Selecta makes the most of its catalogue pages, presenting over 1,200 items. Here are fewer than 1/2% of them.

Not too much is known about Britain during classic times. Julius Caesar tried to capture the isles, but it was not until Claudius in the first century that Rome took control of most of the land. Unfortunately, while the Romans kept good accounts of what was going on in Rome, they did not maintain very good records about the far edges of the empire. Nonetheless, we do know some things about the wars and rulers that controlled Britain on Rome's behalf. The history of Britain during this time is the subject of Invasion and Response. The Case of Roman Britain, by B.C. Burnham and H.B. Johnson, published in 1979. Rome controlled Britain until the Fifth Century, but as the empire declined and fell, it was no longer able to hold onto its far away provinces. Priced at €30 (euros, or about $40 in U.S. dollars).

While Roman rule of Britain in the first century may not be well documented, there was much more written about rule in Rome itself. Item 1136 is The Annals of Tacitus. It includes a commentary by F.R.D. Goodyear. Tacitus, who lived from the first to the second century, covers the period from the rule of Tiberius (14) through that of the brutal Nero (68). Tacitus was himself a political leader and survivor of several rulers who also served as one of Rome's leading historians. He provides a detailed look at a civilization that was advanced well beyond its time in terms of culture, architecture, and the like, while having an element of cruelty and brutality that seems unfathomable for such a developed civilization. €170 (US $228).

Ancient Greece may belong to the distant past, but its influence remains. Doctors to this day take the Hippocratic Oath, though Hippocrates has been gone almost two-and-a-half millennia. Hippocrates' oath requires physicians to do their best to help their patients, and to never do them any harm. That may seem obvious today, but he lived in a time when humanitarian concerns were not exactly what we would expect today. Item 617 is L. Edelstein's The Hippocratic Oath. Published by the Johns Hopkins Press in 1943, it translates and interprets this great statement of a physician's duty. €18 (US $24).

Going even further back in time, we come to Pythagoras, who lived around 500 B.C. Most people are familiar with Pythagorus' name for his theorem about right triangles (squares of the sides equal the square of the hypotenuse) and his prohibition against eating beans. The latter was not because of the unpleasant side effects of eating them, but probably because of some sort of religious belief, possibly that they contained the souls of the dead. Unfortunately, little is known for certain about this early Greek philosopher, mathematician, and religious figure as he ran a secretive society, and none of his writings are extant. Most is known through the writings of others, mostly quite a bit later. Item 684 is Iamblichus' Life of Pythagoras, or Pythagoric Life, published in 1926. €75 (US $101).