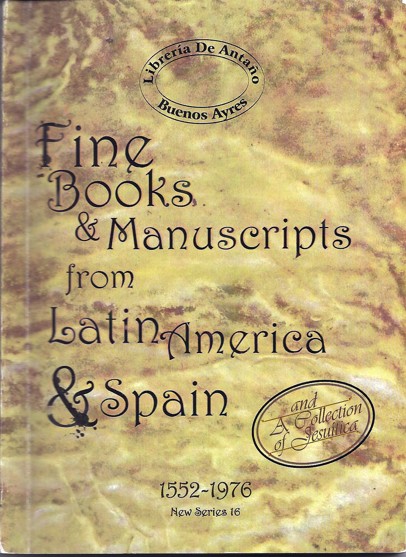 Libreria de Antano of Buenos Aires has issued a new catalogue of Fine Books & Manuscripts from Latin America & Spain 1552-1776. Much of this material is very old, relating to the period when Spain (or Portugal) ruled South and Central America, as well as a portion of North America. Many of the items are decrees from the Spanish King, instructing his subjects in the New World on how to behave. There are also many books relating to the Church and the Jesuits, whose powers rivaled civil authorities. Finally, as Spain loses control of her colonies after the Napoleonic era, we find works relating to revolution and independence. The most recent items, those from the 20th century, are mostly works from writers and poets. Here, now, are just a few of the items being offered.

The Encyclopedie is one of the greatest creations of enlightenment thought. Produced by the French philosopher Denis Diderot between 1751-1772, it was a compendium of knowledge in the sciences, philosophy, and arts. It presented science from a scientific standpoint, perhaps obvious today but not in a time when Church leaders considered themselves the ultimate authority. It also promoted more democratic institutions and tolerance of varied beliefs. Such thoughts were not very popular with the Church or state. Item 44 is Nos Don Manuel Quintano Bonifaz...Inquisidor General, published in 1760. Quintano Bonifaz had the intimidating title of Inquisitor General for all the Spanish kingdoms, and in this order, he prohibits the distribution of the Encyclopedie throughout the Kingdom, and demands the confiscation of any copies found. The order is not surprising as Pope Clement XIII had placed Diderot's Encyclopedia on the Index, a list of books prohibited by the Church. This is a rare copy of the Inquisitor's order published in Mexico. Priced at $3,200.

Item 9 is a first edition of the Historia General del Peru, published in 1617. Author Garcilaso de la Vega was the son of a Spanish Conquistador and an Inca princess. His dual background provided contacts with the sources needed to compile this history, one of three such books he wrote. This volume covers the discovery of Peru by the Spanish, its conquest, and the following civil wars and rebellions. $22,500.