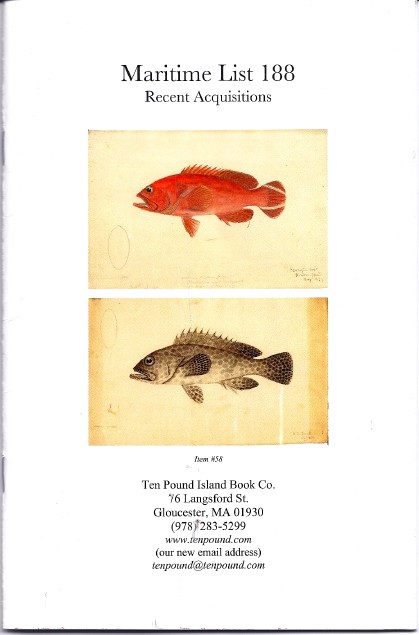 The Ten Pound Island Book Company has issued its Maritime List 188 Recent Acquisitions. The books, manuscripts and ephemeral items in this catalogue relate to the sea, or at least water of some sort. From the fish on the cover, to travels up a river, to shipbuilding and journeys across the sea, this catalogue is filled with great items for those who collect along the water's edge. Here are some of the 99 new items Ten Pound Island has available this month.

Issues of maritime commerce would lead to America's first war, that with Great Britain in 1812. In the early days of America's independence, the British and French were almost always at war with each other. This competition increased with the rise of Napoleon. Each nation attempted to block neutral trade with its rival, blockading ports and seizing neutral ships. America, still weak militarily, attempted to keep out of this rivalry but was regularly dragged in by interference with its shipping by the European powers. Finally, in 1807, President Jefferson attempted to retaliate by signing the Embargo of 1807, which shut down American shipping. The act was extremely unpopular in New England where seafaring trade was at the core of the local economy. Item 95 is a first printing of Consideration on the Embargo Law, an 1808 pamphlet by a local attorney, Daniel Webster. Webster argued that the embargo was unconstitutional. Ultimately, the act was not found to be unconstitutional, but was ineffective in changing the behavior of the European powers. Opposition to the war that ultimately broke out with England would also lead to Webster's political career. He was first elected to Congress in 1812 as an opponent of the war, and he would go on to be one of the greatest senators and orators in American history. Priced at $75.

America's grievances with the European powers became most intense with the British, who impressed American seamen into their service. The result was the War of 1812. However, there were many problems with the French as well, as shown by A Journal; Containing an Account of the Wrongs, Sufferings and Neglect, Experienced by Americans in France. This is an 1809 book by Stephen Clubb, an American seaman arrested in France who spent a year and half in a French prison. Clubb was unimpressed by French hospitality, American prisoners feeling they were no better treated than English ones, though America was not at war with France. Item 18. $200.

Item 58 is a group of four pen and watercolor drawings from the Wilkes Expedition, drawn between 1839 and 1846. This expedition, under the command of Charles Wilkes, was America's first major seafaring exploration and did much to enhance the prestige of the still young nation. These original drawings are of fish, two coming from the hand of Joseph Drayton, one of the expedition's artists. Most likely, these drawings were intended for the volumes on ichthyology, but various distractions, including the conflicts preceding the Civil War, led to these volumes never being published. The manuscript has since been lost, meaning it is unlikely these drawings have ever been published. Two appear on the cover of this catalogue (click the thumbnail image above to see them). $8,500.

Item 9 provides an 1826 description of Hawaii, then still referred to as the Sandwich Islands. It is an account of George Anson Byron's Voyage of HMS Blonde to the Sandwich Islands, in the Year 1824-1825... The primary purpose of the voyage was most unfortunate. It was to return the remains of King Kamehameha and Queen Kamamalu to their home. The King and Queen had traveled to England in 1824 on a goodwill trip, but lacking any immunity, both came down with measles and died thousands of miles from home. $2,500.

Robert Bennet Forbes was a member of Boston's wealthy Forbes family. The family made much of its money in the China trade, though his brother, John Murray Forbes, became one of the early railroad magnates. Robert Bennet stuck with the sea trade, and became known as a merchant, sea captain, and author. Item 37 is one of his works, and as Ten Pound Island notes, he was often ahead of his time. The book is Means for Making the Highways of the Ocean More Safe, published in 1867. What he called for is standard practice today. Forbes argues that many lives could be saved by providing lifeboats and life preservers on board, amazingly enough not standard practice at the time. This copy is inscribed by Forbes on the cover. $200.

Ten Pound Island Book Company may be reached at 978-283-5299 or tenpound@tenpound.com. Their website is www.tenpound.com.