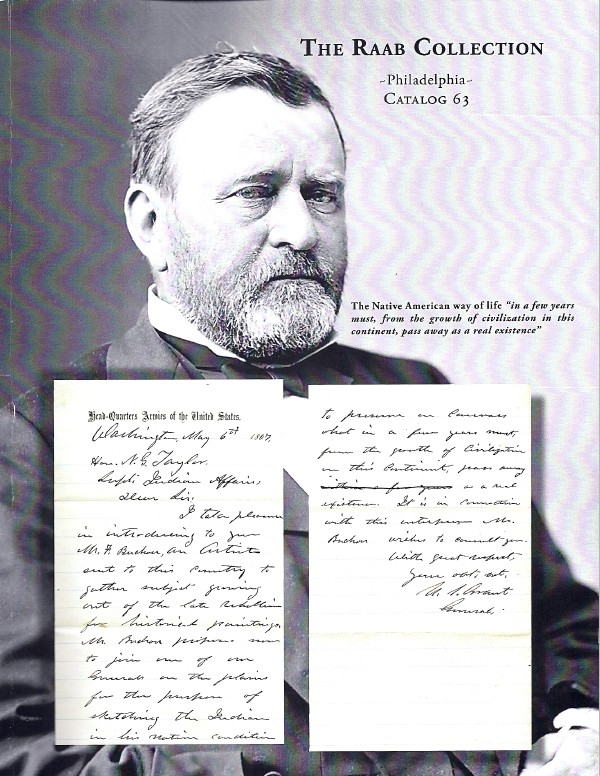 The Raab Collection has published their Catalog 63 of signed material. Most of the items are handwritten manuscripts, particularly the older material, though you will find an occasional book, photograph, or in the case of more recent pieces, typed documents. This is overwhelmingly American material, but with a couple of notable exceptions - Winston Churchill and Raoul Wallenberg. Perhaps they aren't exceptions after all, as Churchill and Wallenberg are among just seven persons to ever receive honorary American citizenship. Practically every individual who has signed his name on some document in this catalogue will be familiar to anyone with even a modest familiarity with American history (only a couple of Civil War generals were not immediately recognizable to this reviewer). Politics and government (including military) service are where most of these people made their names, but there are a few exceptions - Thomas Edison, Albert Einstein, Harriet Beecher Stowe. Signatures range from the era of Washington, Adams, Jefferson, and Franklin, to as recent as Reagan, George H.W. Bush, and William and Hillary Clinton.

George Washington called the members of the U.S. Senate to gather on March 4, 1793, as "Certain matters touching on the public good" needed to be deliberated that day. Actually, the day was far more significant than those dry words imply. This was the date of Washington's second inauguration. After a term dealing mainly with organizational and domestic issues, Washington was about to be thrown into issues of international intrigue, as he would try to steer his young and still weak nation on a path of neutrality and noninvolvement in the wars between European powers England and France. There was much pressure to support both sides in their conflicts, but Washington was intent on avoiding foreign entanglements, a wise course for a nation with such limited military resources. Item 1 is Washington's signed call to attend his inaugural, this one issued to Rhode Island Senator Theodore Foster. Raab has only been able to locate one other such notice in any collection. Priced at $62,000.

Sam Houston may be the most notable of all Texas leaders, but he was not always a Texan. In fact, when he wrote this letter on April 8, 1824, he was a Congressman from Tennessee. Houston had served under Andrew Jackson during the War of 1812, where he was wounded in action. Now in politics, he was a strong supporter of his mentor. In this letter to his cousin William Letcher, he proves to be a good prognosticator of elections. For the 1824 presidential contest, he predicts, "My own opinion is that General Jackson will be the man! If not him, Mr. Adams." In that four-way race, Jackson received the most votes, but not a majority, and in the House, Henry Clay threw his support to John Quincy Adams, who ultimately prevailed. Houston also talks of traveling north, apparently believing that could help his war wounds. "My wound is worse than it has been for eight years and on that account I wish to travel north." Item 6. $4,800.

At the time the Civil War broke out, there were five living former Presidents. They didn't provide Lincoln much support. John Tyler joined the Confederate Congress and Franklin Pierce's pro-Southern sympathies were barely disguised. James Buchanan, very sympathetic to southern interests during his presidency and doing nothing to stop the South's secession, did voice support for the Union but not for Lincoln, which was also true of Millard Fillmore. That left only Martin Van Buren as the one strongly pro-Union former president who also supported Lincoln's efforts. Item 11 is a November 28, 1861, letter, in which Van Buren writes, "...the attack upon our flag and the capture of Fort Sumter by the secessionists could be regarded in no other light than as the commencement of a treasonable attempt to overthrow the Federal Government by military force." He goes on to say, "I approved of the call which had been made by the President upon the loyal states for the necessary means to enable him to suppress the Rebellion..." $15,000.