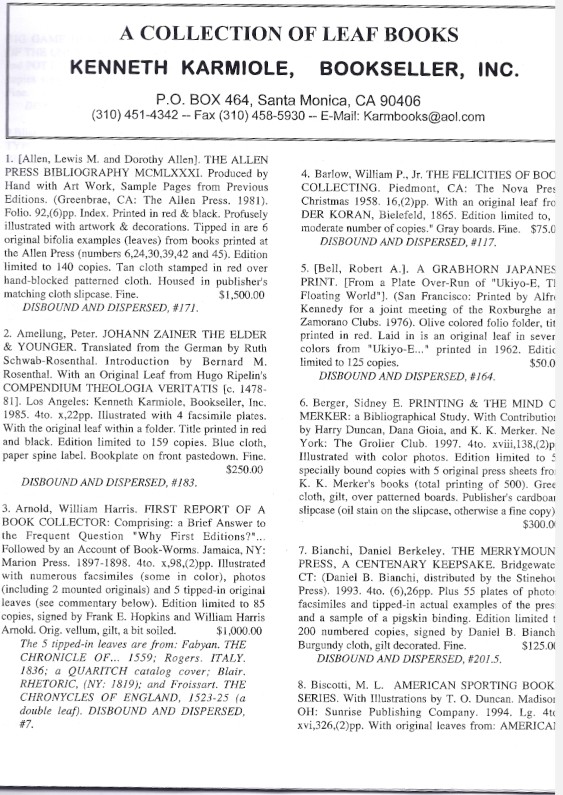 We have received our first catalogue from Kenneth Karmiole, Bookseller, Inc., of Santa Monica, California. However, Karmiole is hardly a newcomer to the book trade. He has been selling rare and antiquarian books in Southern California for over three decades, and he is a major benefactor of research and education in the field. While he has handled numerous types of antiquarian books over the years, this latest catalogue is devoted to a very specific niche: A Collection of Leaf Books. Leaf books are books which feature a leaf or two from some other notably important book or leaves from some fine printer's body of work. They provide collectors with an opportunity to own a piece of some very important and very old books, many of which are either virtually unobtainable, or otherwise obtainable only to those of great wealth. Here are some of the leaf books Kenneth Karmiole is offering.

Item 13 is Stephen Booth's book about, and containing a leaf from, the greatest resource used by Shakespeare in creating his plays: The Book Called Holinshed's Chronicles. The leaf is from the 1587 second edition and is about Queen Elizabeth. Holinshed's Chronicles was the most thorough compilation of British and Irish history at the time it was first published, 1577. This second edition added to the first and this is the edition Shakespeare used for the historic events described in his plays. Booth's account of this work was published by the Book Club of California in 1968. Priced at $175.

Recorded history in California does not go back quite so far as in Britain, but here is a book and collection of material from its early days: Seventy-Five Years in California, by William Heath Davis, with a forward from the Editor, Douglas S. Watson. Published by legendary bookseller John Howell in 1929, this is an account of the state's days under Mexican rule, its quasi-military and territorial governments, and finally its early years as a state. Along with text and numerous illustrations, this edition, limited to 22 copies, comes with 22 pieces of California ephemera. Among them is a large 1853 topographic map of San Francisco, an 1857 mining journal, and the Mayor's proclamation after the San Francisco earthquake. This copy is signed by Howell and Watson. Item 20. $1,500.

Jacob Bigelow's book on American botany was notable for its information on American medicinal plants, but for book collectors it is even more important for its status as a first. It was America's first color plate book. Item 113 is American Medical Botany 1817-1821 by Richard J. Wolfe, published by Bird and Bull Press in 1979. This not only provides details on the printing and distribution of this American first, but includes two engraved plates, including one colored by hand. These plates were never used in a bound copy. Bigelow printed up a lifetime supply of them, which he bound together over the years as demand came in for his book. However, once he developed a means of printing in color, he abandoned the remainder of those plates which had been colored by hand. $300.

Here are some more pages that never saw a bindery: Ashendene Press, Original Unbound Sheets, 1923-1935. The Ashendene Press of Charles Hornby operated from 1895-1935, publishing a collection of fine press books along the way. When Hornby retired and closed the press, there were leftover sheets from various books which Glen Dawson of Dawson's Book Shop purchased from Hornby's daughter. In 1961, Dawson released this collection of sheets from six Ashendene works along with a leaf of notes in a very limited edition of 17 numbered sets. Item 21. $1,250.

Item 26 is a leaf book of biblical proportions: Original Leaves from Famous Bibles: Nine Centuries 1121-1935 A.D. It contains leaves from 60 Bibles, 4 manuscript, 56 printed. Despite the title, the first leaf is from a circa 1150 Bible, not 1135, as compiler Otto Ege misdated that one after confusing the Armenian and Gregorian calendars. This deluxe edition was published by Ege around 1950 in an edition of 100 copies. $10,000.