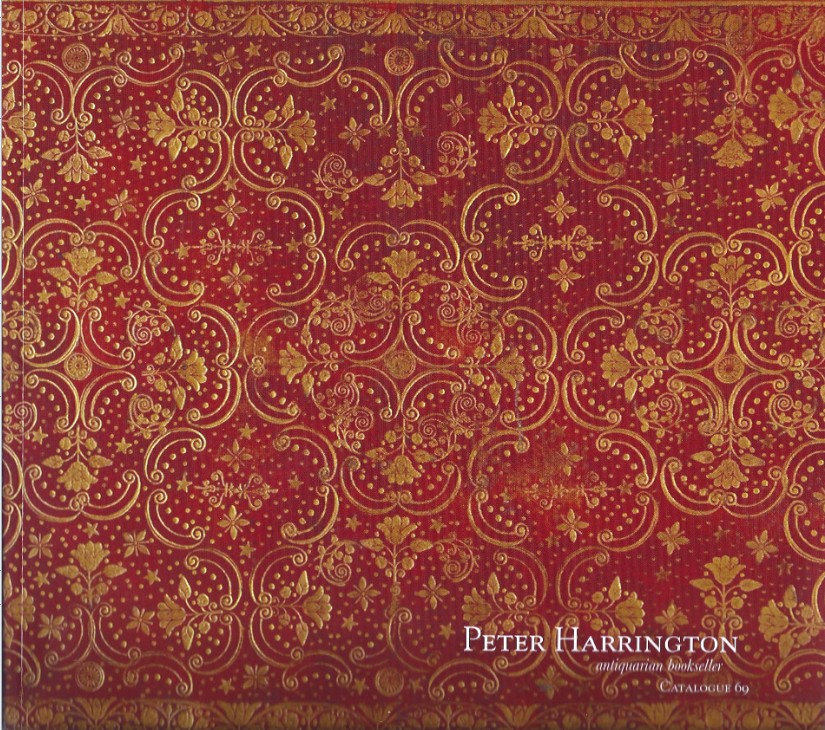 This month we review our first catalogue from Peter Harrington Antiquarian Bookseller of London. For Harrington, this is Catalogue 69. Peter Harrington needs little introduction to those familiar with the rare book trade, but we will provide a brief one anyway. Mr. Harrington began selling books in 1969 at the Chelsea Antiques Market, moving to their current Fulham Road location in London's Chelsea area in 1997. Peter Harrington died in 2003, but the firm continues under the management of his son, Pom Harrington. Harrington trades in the upper tier of books in numerous subject areas. Among those they have handled was a first edition of James Joyce's Ulysses, which recently sold for the highest price ever for a 20th century first edition ($442,900), the publisher's copy and first copy bound of Mark Twain's Huckleberry Finn, a Shakespeare first folio, and recently purchased a first edition of Champlain's Les Voyages, the most expensive item sold at the recent de Orbe Novo (Bruce McKinney) sale ($758,000). Here are a few of the special items being offered in this latest Harrington catalogue.

James Joyce published his book of poetry, Chamber Music, as an unknown writer in 1907. When the printing was complete, Joyce remained an unknown writer. His later novels would lead many to consider Joyce the greatest writer of the 20th century, but this work, though achieving some critical approval, hardly rose to that level. Rather, it is a collection of love poems that were decent, but not revolutionary as his later works would be. Nonetheless, it does provide a portrait of the writer as a young man. The print run for this book was 509, but only around 200 were compiled in this first issue. A recording was made of the poems in this book set to music by various modern musicians just last year, and it seems to have been received similarly to the text version a century ago - some modest critical recognition and not a whole lot of sales. Item 103. Priced at £6,500 (British pounds, or about U.S. $9,728).

Item 5 is a copy of Lewis Carroll's Alice's Adventure in Wonderland, the first published edition from 1866 (Carroll demanded the first printed edition be recalled because of quality problems). It comes with a letter from the author, presumably to Edith Mary Alice Berkeley, which is filled with Carroll's humor. He jokingly chides her for failing to provide the full name of a friend so he could send her a copy of the book. He jokes that anyone else guilty of such conduct "would have been shut up in a prison, or in a lunatic asylum, or, worse still, in a young ladies' school." He then asks what good are young ladies if they don't make themselves useful. "Far better have a set of really useful fire-screens, or wheel-barrows." He has signed the letter as "Lewis Carroll," rather than his real name of Charles Lutwidge Dodgson, or his commonly used "the author." £45,000 (US $67,302).

Item 118 was the first account of one of the most important journeys of the age of discovery: Journal of the Resolution's Voyage, in 1772...1775. The author was anonymous but is now known to be John Marra, a gunner's mate whose writing skills probably required some serious help from an editor. Marra violated the rules by publishing his account in 1775, prior to the release of the official report by the mission's leader, Captain James Cook. The voyage of the Resolution is best known for being the first to penetrate the Antarctic Circle, and disprove the then widely held belief that the region was covered by an enormous southern continent. Marra's account also provides some interesting information left out of the official version, including the reason why naturalist Sir Joseph Banks, who had participated in Cook's first journey, bowed out of this one at the last minute. £9,750 (US $14,658).