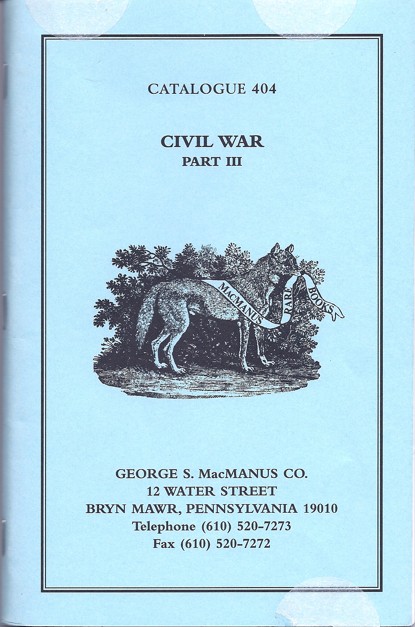 The George S. MacManus Company has issued their catalogue of the Civil War Part III. These catalogues came in alphabetical order, this one going from O'Flaherty to Young. We guess it will be the last in the series, or else the next one will be very short. This one is not. MacManus has managed to include 730 items in this final third of the alphabet. If you are looking for Civil War material, this is the place to find it. It includes many niche works, such as histories of individual state regiments (the Ohio 124th, or the Pennsylvania 175th, for example), and works by individual war participants, from lowly enlisted soldiers to commanding generals. This is a catalogue for the serious collector of the details of this terrible, intra-national affair. Here are some examples.

Item 309 represents a piece of effective, but very bad advice. It is The Address of the People of South Carolina, Assembled in Convention, to the People of the Slaveholding States of the United States. Published in 1860, just after South Carolina seceded from the Union, the South Carolina Secession Convention justifies its action and urges the other slave states to join its cause. Most did, to their ultimate misfortune. Priced at $500.

One state that ultimately, though at first reluctantly, followed South Carolina's lead was Virginia. Part of the credit for this choice should go to George Richardson, whose impassioned pro-secession speech to the Virginia Convention on April 4, 1861, is printed in the Speech of George W. Richardson, of Hanover... MacManus notes that Virginia did not opt to secede until they were called upon by the United States to provide their quota of troops to put down the rebellion. Item 236. $125.

The Union may not have been able to raise soldiers from Virginia, at least from its white population, but this 1863 leaflet provided advice on where the North could recruit fighters with knowledge of the South: General Washington and General Jackson on Negro Soldiers. The writer notes that both Washington and Jackson had led black soldiers, which would now enable the Government to "secure the services of 700,000 able-bodied men, acclimated to and familiar with the seat of the war..." Item 615. $100.

This unnamed writer had strong opinions on the relative merit of Northerners versus Southerners. In 1863 he wrote The Confederate. By a South Carolinian. Writes the unbiased observer, "The Southern, descended from the Cavaliers of Europe, is of the superior race... The abolitionist of the North, sprung from the scum of England, of Scotland and of Ireland, bred in bigotry and intolerance, is of the inferior race." Item 391. $1,750.

Here is a pair of interesting titles. Both are by George F. Robertson, both published in 1932. Item 247 is entitled A Small Boy's Recollections of the Civil War; item 248 is A Small Boy's Recollections of the War Between the States. Do you suppose Robertson had one title for Northern readers, another for Southern ones? The Civil War is priced at $85, but includes an author's inscription. The War Between the States goes for $50.

Item 370 is also an interesting title: When Lincoln Came to Egypt. That's a surprise. I thought he was a bit too preoccupied, particularly during his presidency, to make such a long journey. Actually, this is not the Egypt of pyramids and mummies. "Egypt" is also the name for the far southern part of the state of Illinois, and it is a rural area whose population often has more in common with residents of the border states than with those from Chicago. Lincoln may have had a greater challenge convincing the people of this region. $100.

Item 183 is the book that the bibliography In Tall Cotton speaks of as "probably the most ambitious and important work produced in the Confederacy." It is Francis Porcher's Resources of the Southern Fields and Forests, Medical, Economical, and Agricultural. Published in 1863, it was intended to provide Southerners with a guide to local materials that could be used as substitutes for products unobtainable as a result of the Northern blockade. $3,000.

Item 176 may not be as important a Confederate imprint, but it is a notable one. It is Observations in the North: Eight Months in Prison and on Parole. Author Edward Pollard was a prisoner in the North and he didn't much like it. This 1865 book is notable as it is either the last or next-to last book published in the Confederacy before it fell. $500.