New Acquisitions and On Sale Americana from Clark Rare Books 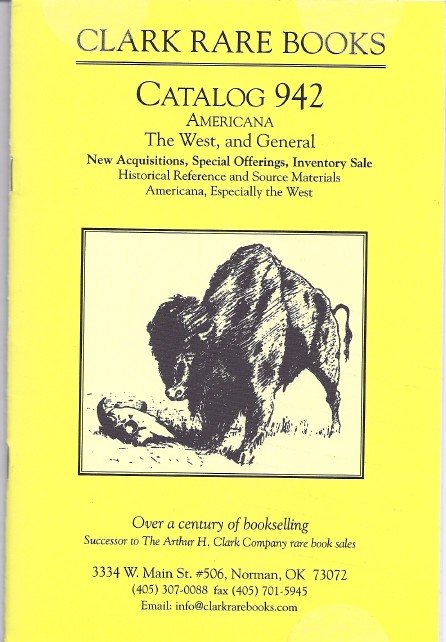 New Acquisitions and On Sale Americana from Clark Rare Books

Clark Rare Books has released Catalog 942 of Americana, The West, and General. This catalogue is broken down into two sections, one of new acquisitions, the other for previous inventory now on sale for 30% off. The new acquisitions are mostly related to the West, while the material on sale is more general Americana. While there is much of interest in both sections, we will focus in this review on books among their new acquisitions.

No American President is more closely associated with the Great American West than Theodore Roosevelt. He loved to visit/explore/hunt the great, untamed spaces and tell of his adventures to the folks back east. Long before he became a recognizable name in the political world, he wrote a series of articles for Century Magazine about life in the West. These six articles would later be compiled in book form, but item 159 consists of volumes 35 and 36 (1887-88) of the magazine, containing Roosevelt's articles on Ranch Life in the Far West. These articles also contained the first major series of illustrations from the great western artist Frederic Remington, who became close friends with the future President. Priced at $90.

Remington may be best remembered for his illustrations, but he also became a notable western writer. Item 5 is a first edition of his Crooked Trails, published in 1898, and both written and illustrated by Remington. $125.

Item 119 is a collection of early Mormon pamphlets, but they were not published in Salt Lake, or Nauvoo, or Missouri, Ohio, or New York. No, they were published in, of all places, Liverpool, England. The author of these eleven items was Orson Pratt, one of the original twelve apostles (and the last surviving) of the Church. He had been baptized very early (1830) and was involved in many of the great travels, including to Utah, but also spent many years overseas as a missionary. He was briefly excommunicated after his return from England in 1841. Founder Joseph Smith had begun teaching plural marriage, and apparently he had requested that Orson's wife, Sarah, who had remained behind, be one of those wives. Orson was not pleased, which led to his excommunication, but while Sarah never accepted it, and eventually left Orson and the Church, her husband reconciled with Smith. He evidently became a wholehearted supporter of plural marriage as he died having 7 wives and 45 children. In 1848, Pratt returned to the English mission where he stayed until 1851, successfully recruiting many new members. It was during this time that he wrote and published the 11 pamphlets here offered, including Divine Authority, or the question, was Joseph Smith Sent of God? and Divine Authority of Book of Mormon. $375.

Item 77 is a second printing of Jonathan Carver's Travels Through the Interior Parts of North America in the years 1766, 1767, and 1768. Carver made the deepest penetration into the American West of any Englishman in colonial times. He traveled through the Great Lakes region, visiting the most outlying British posts, and then, with native guides, crossed the Mississippi and traveled up to the source of the St. Pierre River in today's Minnesota/Dakota border area. He had hoped to make it to the Pacific, but as we now know, he was still quite a ways away. He did bring back Indian tales of a great mountain range to the west which time did prove to be accurate. This issue was printed in 1779. $2,850.

Nolie Mumey was a westerner of notable accomplishments in various fields. Those involved with western books will undoubtedly be familiar with his name, as he authored numerous titles on the West, Colorado in particular, including many biographies. He was also a poet. However, Mumey was trained as a physician, and was also an accomplished aviator, having served as a flight surgeon in the First World War. Item 1 is one of his physician/aviator books, written with John S. Chase and published in 1931: Physical Requirements for Commercial Flyers. For anyone looking for an author to collect who offers many books to accumulate, but at reasonable prices, Mumey is a logical prospect. $95.

You will find many of Clark Rare Books' books listed in "Books For Sale" on this site. Click here.