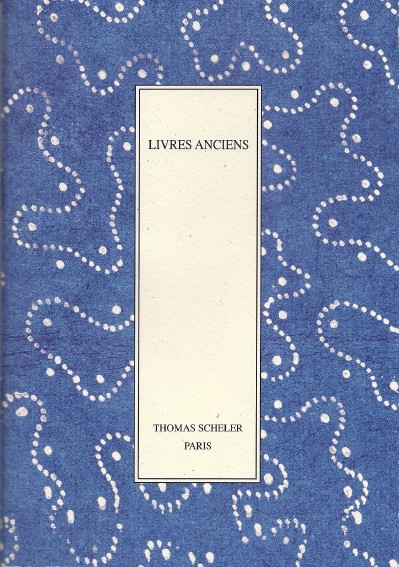 We recently received catalogue 39 of Librarie Thomas Scheler's series of Livres Anciens, or Antiquarian Books. These are primarily books in the French language, though there is a smattering of titles in English, Latin, and German. They were published in the 16th through the 19th century, thereby easily qualifying for the description "antiquarian." While most were published in French, there are many titles which pertain to collections with other focuses, including America, as we soon shall see. The catalogue itself is written in French, so some familiarity with the language is naturally desirable. Here are some of the 171 works being offered.

Item 150 is one of those French books with a primarily North American interest: Le Grande Voyage du Pays des Hurons... by Gabriel Sagard. Sagard was a Recollet missionary who spent part of the years 1623-1624 in what was then New France, the Great Lakes area of North America. He recounts life in the French missions, natural history of the Great Lakes area, and describes the customs and culture of the Iroquois Indians. He focuses particularly on the Hurons, and his two-volume work includes the first printed Huron vocabulary. Priced at €28,000 (euros, or approximately US $40,421).

Pierre Francois Charlevoix was another French missionary, in his case a Jesuit, who visited North America, though a century after Sagard. He, too, visited the Great Lakes region, and eventually traveled down the Mississippi, from 1720 to 1722. Years later, he produced a six-volume work on what was then called "New France," now mostly part of Canada. His book is titled Histoire et description générale de la Nouvelle-France... published in 1744. He draws on the works of other explorers to describe the region in great detail, but concludes with the experiences from his own visit. Item 34. €4,500 (US $6,495).

Here is a journey that was strictly in the author's imagination, and yet it was a precursor to discoveries later made by Cook and other real explorers. The title is Histoire des Sevarambes, peuples qui habitent une Partie du troisieme Continent, communement appelle la Terre Australe. This is a story of the Sevarites, a nation that inhabited the continent then known as "Terre Australe," a land believed, but not certain to exist, which was located partly in the area of what is today known as Australia. This is a 1716 Amsterdam edition of a book first published in English in 1675. It tells of a shipwrecked sailor who finds a utopian, polygamous society in this previously unknown southern continent. It is presented as the work of a Captain Siden, but he was as fictional as the Sevarites, the true author being Denis Vairasse D'Alais. Item 165. €3,500 (US $5,052).

The man who definitively described that unknown "Terre Australe," and explained that it was not part of some massive southern continent but a smaller continent of its own, was James Cook. Cook traveled to the Pacific three times from England in the late 18th century, charting much of Australia, the Pacific islands, and the northwest coast of North America. It was Cook who also discovered the Hawaiian Islands. Item 89 is the first detailed biography of the great explorer, The Life of Captain James Cook, by Andrew Kippis, published in 1788. It tells all about Cook's professional career, his service mapping Newfoundland in the 1760s and then his three great voyages to the Pacific. It also contains Samwell's account of Cook's death in Hawaii along with numerous tributes to the beloved explorer. This was the most notable of biographies of Cook for a century, a very popular work about a man enormously admired in his homeland. €3,000 (US $4,331).

Item 123 is the Memoire de F.A. Mesmer... published 1798-99. This would be the memoir of Franz Anton Mesmer, whose theories of "animal magnetism" were the rage in late 18th century France. The term "mesmerize" comes from M. Mesmer. He believed these magnetic forces affected behavior, though others believed that he was working with a form of hypnotism. €3,000 (US $4,331).