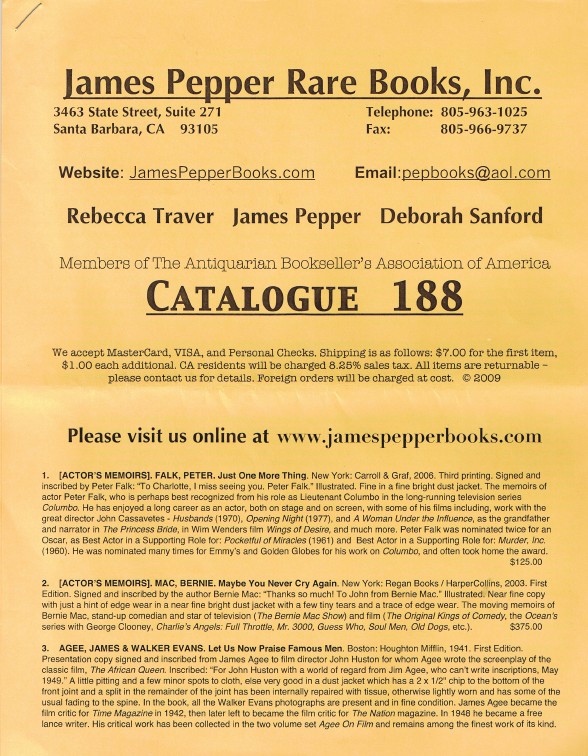 James Pepper Rare Books has whipped off their latest catalogue of books and related material, Catalogue 188. Pepper is one of the more prolific cataloguers, issuing a new collection virtually every month. The firm specializes in literature, film-related material, mystery and detective fiction. Each month brings a new group of interesting items. Here are some of the latest.

Item 9 is a pamphlet for the premier role of one of America's most popular movie stars of the roaring 20s. The pamphlet is for the 1927 film It, starring Clara Bow. Bow was the object of many a young, and old man's dreams at the time, a beautiful young lady with a rough personal background but a flair for the camera. In this film she plays the classic poor girl wins the love of a rich man role. She emerged from the film with the title the "It Girl," which came to refer to a woman who had...well..."it." Clara Bow's film career was relatively brief, roughly ten years from bursting on the scene in silent movies, to a few talkies, and finally marriage and children, retirement from film, and psychological issues likely originating from her childhood that resulted in a difficult life. Priced at $300.

Clara Bow might never have made it to talking films were it not for Lee DeForest. Item 36 is a copy of DeForest's 1929 book: The Home of DeForest Phonofilm: The Miracle of Science. DeForest is best known for his invention of the Audion vacuum tube, which greatly amplifies weak electronic signals. It made radio possible. However, this book deals with a second DeForest invention, a means of adding sound to film. It was one of several such means developed in the 1920s that changed the movie industry, and the careers of many of the silent film greats, for better or worse. $125.

In his later years, De Forest became a proponent of very conservative political views, including hunting down supposed communists in the government, McCarthy's cause, so he likely would have appreciated this book: Red Channels. The Report of Communist Influence in Radio and Television, published in 1950. This book lists 151 writers, artists, musicians and others with alleged subversive motives. Among those listed were Edward G. Robinson, Orson Welles, Lillian Hellman, Leonard Bernstein and Pete Seeger. And another listed "subversive" was the owner of this book, the noted 30s and 40s band leader Artie Shaw. Apparently, one of his eight wives, Forever Amber writer Kathleen Winsor, said in her divorce proceedings that Shaw had once confessed to being a member of the Communist Party, though he tore up his membership card immediately upon issue. The book comes with a clipping from Time Magazine concerning a 1957 Fifth Amendment case with a handwritten notation from Shaw. Item 118. $600.

Item 55 is a most interesting and revealing letter from author and screenwriter William Goldman. Goldman had been asked to give a speech at the New School in New York with Stephen King in 1980. Goldman declined. He confesses to extreme stage fright, noting, "...the idea of getting up in front of a group and doing anything not only gives me insomnia, it literally causes me to fixate on the coming event for what seems like forever." He then reveals a dream about speaking in public where the audience walks out. He concludes, "Sorry, because I'm a fan of Stephen King...but my public speaking days are now forever behind me...If King is ever in New York and would like a drink or dinner, please tell him I'd love to meet him. I'm in the phone book..." Perhaps King took up the offer, for as Pepper notes, Goldman and King would become well-acquainted, with Goldman writing screenplays for three of King's works. $250.