From The Seattle Fair by Kevin F. Kelly, Bookseller 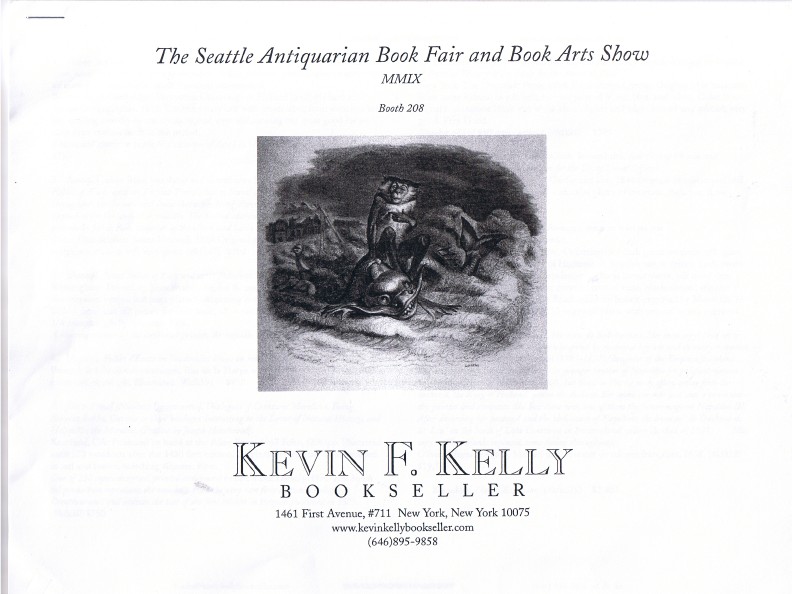 From The Seattle Fair by Kevin F. Kelly, Bookseller

Kevin F. Kelly, Bookseller, issued a recent catalogue for The Seattle Antiquarian Book Fair and Book Arts Show. What he brought to the show was a varied lot. You can find anything from ancient children's fables to tales of mutiny and piracy. His booth must have been an enticing place, but since the show is now over, we will have to look at the catalogue instead. Here are a few of the books and ephemera it describes.

Item 65 is Liber chronicarum, what is more commonly known as the Nuremberg Chronicle. This was a massive 15th century undertaking by physician Hartmann Schedel. It is an account of the history of the world, from creation through its year of publication, 1493. Even more notable than its extensive text are the voluminous number of illustrations, 1,809 woodblocks in all. They were created by Michael Wohlgemuth and Wilhelm Pleydenwurif, though some undoubtedly were designed by Albrecht Durer, who was an apprentice to Wohlgemuth at the time. The illustrations include kings and bishops, along with biblical and historic scenes, and numerous city views (sometimes repeated for different towns). It also contains an important world and European map. The world map depicts the world as it was known when Columbus set sail. A note in the Latin edition may imply that Martin Behaim of Nuremberg and James Canus of Portugal had discovered the New World a decade earlier, but if this is the implication, it was likely an attempt to discredit Columbus rather than an accurate portrayal of their African journey. Offered is a copy of the first issue, first edition, from July 12, 1493, published in Latin (a German edition was published later that year). Priced at $98,000.

Item 8 is an item fit for a queen: Romances mises en musique par S.M.L.R.H. (Her Royal Majesty Queen of Holland). Hortense de Beauharnais was born in 1783, the unwanted daughter of a military man who soon divorced her mother and was executed during the French Revolution. She seemed destined for an obscure life, but all of that changed when her mother, Josephine, remarried a little French guy named Napoleon. There was a man Hortense loved, but when her step-father became Emperor, diplomacy forced her in a different direction. It was determined that she should marry the childless Napoleon's brother, Louis Bonaparte, thereby creating the opportunity for issue with the bloodlines of both Napoleon and his wife. Napoleon set up his brother as King of Holland, making Hortense the Queen. She was miserable, having no love for her husband, a feeling that was reciprocated. So she amused herself with other activities, from having a lover to writing this book of romantic musical poems. The copy offered belonged to the Queen herself. Circa 1810. $19,500.

Item 50 is an 1803 letter from President Thomas Jefferson to Maryland Congressman Joseph Nicholson. The topic is the war with the Barbary pirates, a subject that tore at Jefferson's thinking. The United States had paid the leaders of the North African, Barbary states tribute to stop them from pirating American vessels in the Mediterranean. It was a practical policy, but one that Jefferson could not stomach on principle. So, he sent American naval vessels to battle the pirates. However, Jefferson did not like a standing military, believing in local militias that could be called up in time of crisis. Jefferson reassures Nicholson that the conflict was limited and the U.S. would soon be able to reduce its presence in the Mediterranean. The President proved to be wrong, as the Barbary leaders upped the level of conflict and it took several more years for the U.S. to subdue the pirates. $50,000.

Of course, America had her pirates too, but they served a more noble cause. Item 18 is the History of the American Privateers, and Letters-of-Marque, during our War with England in the years 1812, '13, and '14. This is an 1856 book by George Coggeshall. Unlike the British, America had no real navy during the War of 1812, so the nation turned to private ships, enabling them to operate like pirates against British shipping interests. $750.