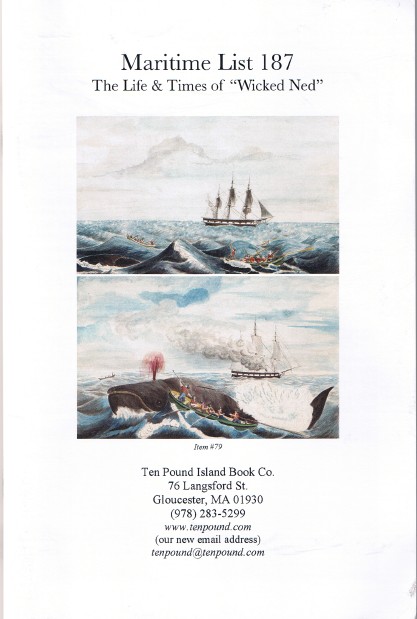 The Ten Pound Island Book Co. has issued Maritime List 187. The Life & Times of "Wicked Ned." We'll get to that "Wicked Ned" part in a minute, but first, this is a collection of 110 nautical items. There are books, maps, charts, manuscript logs, images, commissions, all sorts of material related to the sea. Most are quite old, coming from a century which no one under 110 years old has personally experienced. We will now take a look at some of these seafaring works.

Item 37 is a Message from the President of the United States...Exhibiting a Statement of the Circumstances Attending the destruction of the Frigate Philadelphia... issued in 1804. This was an instance where the U.S. forces blew up their own ship ... and it was a great naval victory. The U.S. had been paying tribute to the Barbary states to prevent piracy against American shipping in the Mediterranean when Thomas Jefferson took office. Though it may have been a practical arrangement, Jefferson was incensed by the principle. He sent American ships to intercept the pirates, a reasonably successful policy. However, one of America's best ships, the Philadelphia, ran aground off of Tripoli, its crew taken into slavery when they were unable to free the ship. The Americans were deeply concerned about this fine vessel coming into the hands of the pirates, so a mission headed by Stephen Decatur snuck onto the ship and set it afire. Mission accomplished. Priced at $125.

Item 40 is a seaman's protective certificate issued to Eldridge Sanders of Brooklyn in 1859. These certificates were originally intended to protect American seamen from being impressed into the British Navy. However, after the War of 1812, there wasn't much of that taking place anymore. By 1859, the certificates' main purpose was to protect black sailors, like Eldridge Sanders, from being seized into slavery in the American South. Without a certificate attesting to being free born, any black man was likely to be treated as a runaway slave in much of America. $350.

Item 25 is Rose Cottage, a 1940 book by Oliver W. Cobb. Rose Cottage was the Marion, Massachusetts, home of the Briggs family, built in 1800. The Briggs family produced several New England mariners, including Benjamin Briggs, captain of the ghost ship Mary Celeste. The Mary Celeste, Briggs at the helm, crew of ten, carrying 1,700 barrels of alcohol to fortify Italian wines, left New York on November 5, 1872. She was not seen again for exactly a month when another merchant ship headed for Europe spied her moving erratically. They investigated, finding ship and cargo all in order, except for one detail. There was no one on board. Many theories have been raised over the years to explain their disappearance, such as abandoning ship in a storm fearful lightening would cause the cargo to explode, but no one knows for sure. No sign of the crew was ever found. This book recounts the mystery-tragedy of the ship and provides details about the life of Benjamin Briggs. $75.