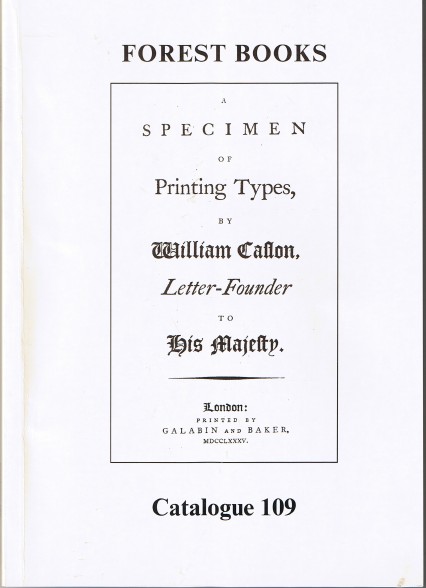 Forest Books recently issued their Catalogue 109 Bibliography, Bookbinding and Reference. Forest is an English bookseller so it is not surprising that most titles come from the U.K., though by no means all. There are American and European items as well. There is a particularly outstanding selection of auction catalogues offered. Many of the greatest sales are represented here, an opportunity to see what was held in the most notable collections of a century or two ago just before they were dispersed. There were private collections as large as a couple hundred thousand books, and sales that went on as long as 38 straight days. Collectors were quite serious then. Here are just a few of the over 500 books Forest Books is offering this time.

We will start with an item that contains no text, and isn't a book at all, but is still an outstanding piece for an antiquarian book collector. It is a collection of 28 sheets containing impressions from 239 woodblocks. Though undated, they are circa 1815 (three sheets are watermarked 1815). The subjects illustrated are numerous, including biblical scenes, printer's ornaments, fighting cocks, royal arms, scientific instruments, ships, astrologers, knights, soldiers, figures in stocks and on gallows, coats of arms, a mermaid, and so on. Many would have been used in chapbooks. One comes from Robinson Crusoe. Among the creators of the blocks was the most notable of all the wood engravers, Thomas Bewick. The date of the watermark indicates these impressions would have been made by Newcastle printer and publisher George Angus. Item 29. Priced at £1,595 (British pounds, or U.S. $2,626).

Here is the auction catalogue for one of those spectacular early collections: Bibliotheca Heberiana. Catalogue of the Library of the Late Richard Heber... Heber was a huge collector of the Dibdinian age. Between 1800 and 1830, he purchased at every London sale. At times he bought a few books, at others entire libraries. He was rarely satisfied with just one copy of a book. It has been estimated he owned between 200,000 and 300,000 books, housed in eight different locations. He must have been of substantial means, because not only did he own all of those building, but spent the then monumental sum of over £100,000 building his collection. Heber died in 1833, and these auctions took place from 1834-1836. The market was not so kind to his heirs, it having become weak at a time when his large collection flooded the market. It realized only £65,774. Offered are the first 12 volumes of the sale (there was a 13th volume of Dutch books sold in 1837). Item 197. £1,995 (US $3,278).

Item 23 records another famous auction: The Hamilton Palace Libraries. Catalogue of the...Portion of the Beckford Library. This auction took place in 1882-1883, but the story goes back to the beginning of the century. Many of the books were collected by the eccentric William Beckford. Beckford, author of the once popular fiction Vathek, built an enormous palace and tower, known as Fonthill Abbey. In it he placed his magnificent if unfocused book collection. By 1824, Beckford's extravagance caught up with him and he was forced to sell most of his books. However, many made their way to his son-in-law, Alexander Hamilton. Hamilton died in 1852, and eventually his family fell on hard economic times and was forced to sell the family books, and much more, in this 1882 sale. £345 (US $566).