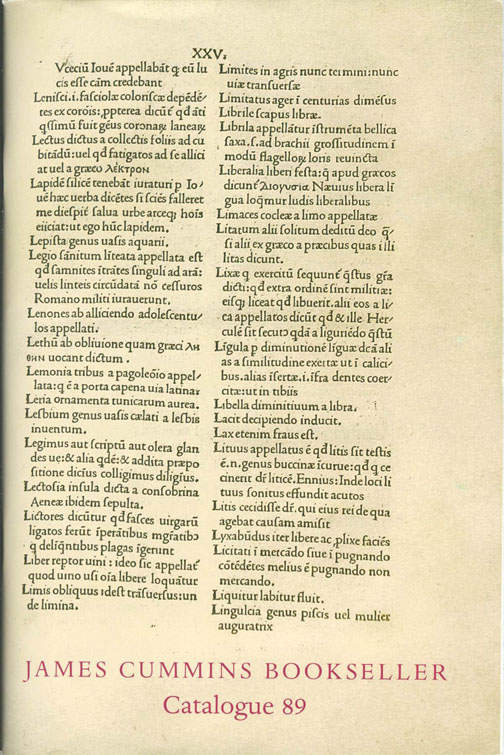 James Cummins Bookseller has released their latest catalogue and it comes with the appropriate name “Catalogue 89.” The name is appropriate as it’s hard to be much more descriptive than that. A James Cummins catalogue tends to offer a wide variety of books and manuscripts, making it hard to pigeonhole. The same applies to Catalogue 89. So here are a few samples of what’s inside.

Collectors of automobilia will be interested in item 5. It is a British title by J.H. Knight called Notes on Motor Carriages. The date is what is notable: 1896. Cummins describes it as “the first English language automotive book.” It was published in the same year as the Locomotives on Highway Act was passed, but earlier during that year. This act removed previous extreme restrictions, opening up the highways to automotive traffic. Facing the title page is an announcement for “The Self-Propelled Traffic Association,” which sounds like a precursor of America’s AAA. Priced at $1,750.

Here is an item that will be fascinating to anyone who collects Thomas Jefferson. Jefferson was evidently used by the former editor of the Savannah Republican as an excuse for not paying his debts. This was probably plausible since Jefferson was noted for having problems with his own. Jefferson (in contrast to someone else) read many newspapers while president. However, he cancelled his subscriptions to several when he left office. The Savannah Republican was one such paper. However, former Editor Norman Mclean owed James Edwards of Boston a sum of money, and as an excuse for not repaying, claimed he was awaiting the $1,000 owed him by Jefferson so he could repay his debts. Tired of waiting, Edwards wrote Jefferson directly, imploring him to pay his debt to McLean so that McLean could pay him in return. What we have here is Jefferson’s manuscript letter to Edwards, vigorously denying any debt on his part to McLean. Cummins points out that Jefferson’s money problems are likely what led him to write such a long and spirited self-defense, for this time he was totally innocent of owing any money. Item 59. $45,000.

Another interesting manuscript document is item 63, a power of attorney signed by Lafayette to James Madison in 1804. The United States Congress, at President Jefferson’s urging, had granted Lafayette a large land grant in the west in 1802. He hoped to lure America’s Revolutionary War friend back from France. Ultimately, it didn’t work, and Lafayette did not come back again until 1824. However, since he owned all of this land, he needed someone to look after it for him, and so in 1804, he created this power of attorney in favor of James Madison so that Madison could look after his interests in the land for him. $25,000.

With all of the debates concerning gay marriages going on today, this 1697 work put together by one Hieronymus Delphinus (likely a pseudonym) seems suddenly topical. It is a series of judicial opinions (in Latin and German) about the marriage of Bartolomeo de Sorlisi and Dorothy Lichtwer in 1666. You see Sorlisi was a eunuch, and his surreptitious marriage provoked a great outcry when it became known. Evidently, the public heaped much abuse on Sorlisi, who died six years later, apparently in a state of depression. After his death, the marriage was dissolved. Item 39 is Eunuchi Conjugium... $1,250.