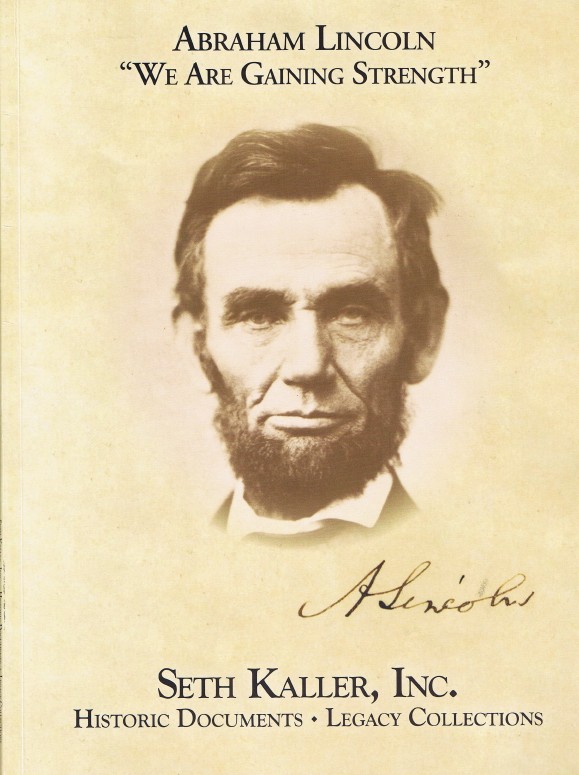 Seth Kaller, Inc., has issued a catalogue devoted to Abraham Lincoln and his legacy. It begins with an unknown Lincoln preparing documents in his law office and concludes with Theodore Roosevelt citing Lincoln as an example of promoting independent views within a political party, rather being forced to tow the party bosses' line. Within this collection you will find numerous Lincoln signed documents, including some of great historical importance. For those able to collect Lincoln on a very high level, this is a catalogue you definitely should see. These are a few of the items Kaller is now offering.

In 1843, Lincoln was contemplating his first run for national office, that of congressman from his Illinois district. On February 14, he wrote a very soft and self-effacing letter to Congressman Alden Hull. Addressed to "Friend Hull," Lincoln does not ask for his support. Rather, he simply requests, "If...there are any whigs in Tazewell who would as soon I should represent them as any other person, I would be glad they would not cast me aside until they see and hear further what turn things take." Lincoln then goes on to emphasize that he is not assuming Hull to favor him over other whigs, but that he merely wished to "...communicate a fact which I wish my particular friends (if I have any) to know." Ultimately, Lincoln did not receive the nomination as the whigs agreed on rotating nominations, with Lincoln being nominated and elected in 1846, and serving a single term in Congress. Priced at $90,000.

In the spring of 1862, several months before issuing the Emancipation Proclamation, Lincoln proposed a program of compensated emancipation for the border states as a means of gaining greater support. The idea was to pay slaveholders for their emancipated slaves. Lincoln figured this would cost $173 million, or the cost of funding the war for 87 days. He believed the loyalty purchased would shorten the war by more than 87 days, making this a wise financial investment. On March 5 of 1862, Lincoln wrote this brief message to his Secretary of State: "Please summon the cabinet to meet me here at 7:00 this evening." While Lincoln did not state the purpose, a notation in another hand points out that the following day Lincoln sent his message to Congress recommending compensated emancipation. This was the topic of the meeting Lincoln called. Lincoln's plan never garnered much support, and so a few months later, he took the more drastic step of emancipating all of the slaves in the states in rebellion (though not those in the border states considered in this proposal) without compensation. $180,000.

It was a brief, yet momentous speech Lincoln made on November 19, 1863. The President had come to Gettysburg to dedicate the battlefield as a memorial to those who had died defending the Union. His speech was short, almost an afterthought after that of Edward Everett, one of the great orators of the day, who spoke for almost two hours. Lincoln was wrong about one thing in his brief speech, that "the world will little note nor long remember what we say here." His speech has been recited by countless generations of schoolchildren and at least in part is familiar to millions of Americans still today. Offered are two of the first day publications of the Gettysburg Address from November 20, 1863, one from the New York Times and the other from the New York Herald. Both papers also contain Everett's long and forgotten speech. Each is priced at $9,500.