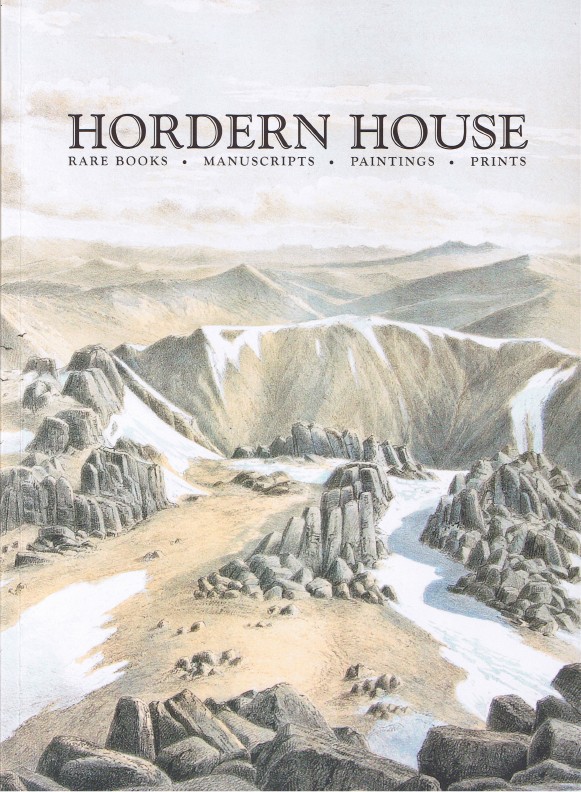 Hordern House recently published their 2009 Special Catalogue, a conclusion to a year perhaps less special than this catalogue. Despite only containing 34 items, Hordern House still managed to come up with a large, thick catalogue. Their catalogues are always special, befitting the works they offer. These are some samples.

If you ever do a word association for the word "mutiny," almost certainly the first one to come to mind is Bounty. And after that, it's probably its dour captain, William Bligh. Bligh was sent to Tahiti to gather breadfruit, the idea being to transport the fruit trees to the Caribbean as a cheap food source for slaves. Bligh gathered his crop, but shortly thereafter, many of his crewmen mutineed. They spoke of the unpleasantness of working under Bligh's command, though he was probably less abusive, at least physically, than many captains of his era. More likely, they liked the leisure and women of Tahiti, and decided this offered a more rewarding lifestyle than the cold and damp of London. The blow to Bligh's reputation caused by the mutiny, however, was more than balanced by his marvelous feat of leading the longboat on which he and those loyal to him were cast 4,000 miles to safety. Along the way, he even managed to first chart part of Australia's northern coast. Item 4 is Bligh's A Narrative of the Mutiny, on Board His Majesty's Ship Bounty, the Captain's first account of the incident published in 1790. Bligh wanted to get his side out before the court martial of the mutineers was heard, to absolve himself of all blame. Priced at AU $23,500 (Australian dollars, or roughly $21,485 in U.S. dollars). Item 5 is the more detailed and corrected account Bligh published in 1792 when he was less rushed: A Voyage to the South Sea, undertaken by Command of His Majesty, for the purpose of conveying the Bread-fruit Tree to the West Indies, in His Majesty's Ship Bounty... AU $22,000 (US $20,112).

George Anson didn't have to deal with a mutiny, but he did have deserters. Item 1 is a letter Anson sent to a commissioner of the Royal Navy in Plymouth in 1746, requesting he apprehend and court martial two men who deserted his ship in port. Anson had sailed into Plymouth as much of his crew was sickly and his ships foul. No wonder they deserted. Or perhaps they were aware that Anson had accomplished a circumnavigation a few years earlier which had made him rich, but that most of his men had died of disease and shipwreck along the way. AU $8,850 (US $8,090). Item 11 is a compilation of discoveries published in two volumes from 1770-71 by Alexander Dalrymple: An Historical Collection of the Several Voyages and Discoveries in the South Pacific Ocean. This work represented the state of knowledge of the area when James Cook set out on the first of his three voyages. Dalrymple was a firm believer in the existence of a huge southern continent, a belief he promoted through this collection of voyages. Dalrymple had hoped to lead the expedition to the South Pacific, but when he held out for an admiralty commission, the call went to Cook instead. Adding insult to injury, Cook eventually disproved the large continent theory by sailing through what was supposed to be part of its body. Nevertheless, Dalrymple went on to have a long and illustrious career, while Cook paid for his good fortune by being killed on Hawaii by unhappy natives in the prime of life. AU $28,250 (US $25,824).