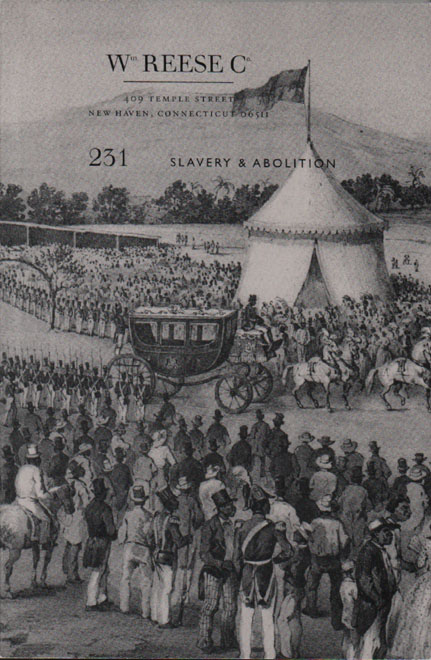 The latest catalogue from the William Reese Company is a fascinating look at that peculiarly horrible institution, slavery. It is entitled “Slavery & Abolition,” and while the majority of the items pertain to slavery in the United States, others are connected with its existence in the Caribbean, South America, and the slave trade in Africa and even Europe.

While many Reese catalogues are collections of high-priced material outside the range of the average collector, the great majority of these items are moderately priced. Consequently, anyone who collects printed material related to slavery will want to look through the items offered in this, Reese’s 231st catalogue.

Some of the most interesting books are the ones you wouldn’t expect. Take, for instance, Poor Peter’s Call to His Children and to All Others Who Can Hear and Believe. This book includes an impassioned essay on “the Injustice of Slavery,” an uncommon though hardly unique position at the time it was published, 1812. Author Peter Clemmons states “all who buy negroes, to keep or to sell in slavery for gain…be as men who buy stolen goods of a thief…” What makes this book exceptional is that Clemmons was a southerner, his book was printed in North Carolina, and he had once been a slaveholder himself. “Freedom is the negro’s just right,” writes Clemmons. Reese explains that Clemmons, North Carolina, is named for this remarkable man. Item 50. Priced at $4,000.

Here’s another oddity. Europeans who visited America, even those who came away favorably inclined, almost always saw slavery as our dark side. So here is Englishman D.W. Mitchell expressing pro-slavery views in Ten Years in the United States: Being an Englishman’s Views of Men and Things in the North and South. Mitchell was likely influenced by spending most of those years in Richmond, and yet it is surprising to hear these views from an Englishman, especially at such a late date (1862). This copy contains many annotations, apparently in anticipation of a second edition which was never published. Perhaps Mitchell thought it better to bury these opinions once slavery was abolished. Item 149. $500.

John Stedman was sent to put down a slave revolt in Surinam (Dutch Guiana) in the 1770s. He too breaks the mold of expectations, for while he followed his orders, he clearly sympathized with the slaves. He describes the cruelties practiced against them and the moral debasement of the masters who performed these abuses. His book is called a Narrative, of a Five Years’ Expedition, Against the Revolted Negroes of Surinam…, and it is item 184. $9,000.