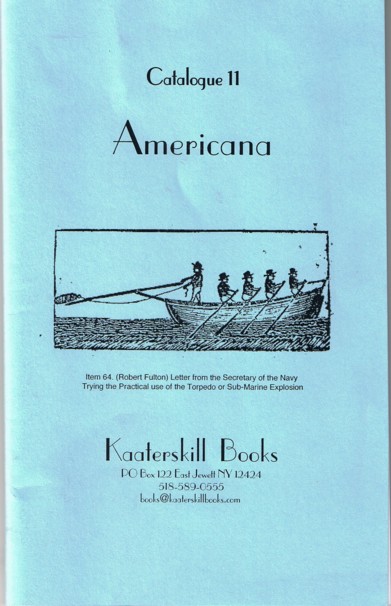 Kaaterskill Books has issued their 11th catalogue of Americana. It is difficult to use any more limiting terms to describe this catalogue beyond the title, as all sorts of material related to America can be found. We will say that these are antiquarian works, the great majority coming from the 18th and 19th centuries. Otherwise, we will let the catalogue speak for itself. Here are some of the items it contains.

Item 25 is the 1876 edition of George Catlin's Illustrations of the Manners, Customs, & Conditions of the North American Indian. Catlin had toured the West in the 1830s, creating some 600 paintings from 48 tribes in the last days before their culture was overwhelmed by settler influences. His book was originally published in 1841, and while some of the earlier editions were colored by hand, this 1876 edition was the first to be printed in color. As far back as 1922, Maggs Bros. described this edition as "very scarce." Priced at $4,800.

Fears of a swine flu pandemic make this 1879 book current: A History of the Yellow Fever. The Yellow Fever Epidemic of 1878, in Memphis, Tenn., by J.M. Keating. In the spring of 1878, there was an outbreak of Yellow Fever in the Caribbean, Cuba in particular. Ships came into the port at New Orleans, and despite local officials' attempts at quarantine, cases of the illness arose in that city. People fled New Orleans, while cargo continued to be shipped out. Through one of these carriers, the disease reached Memphis. As people became ill, huge numbers of the population began to flee. They filled up every available railroad car, carriage, wagon, furniture van, whatever they could find. Some made it to places where they were welcome, though other communities stationed armed guards at their borders to chase the refugees away. Over half the population escaped. Those who remained suffered terrible casualties. By the time the epidemic ended, over 5,000 residents of Memphis had died, over 10% of the population. Of course, this was long before antibiotics, and most of the remedies of the day, such as bleeding, were useless if not harmful. Item 86. $200.

Item 52 is American Political Ideas by John Fiske, published in 1885. Fiske was a follower of Herbert Spencer, one the great thinkers of the 19th century who developed a series of evolutionary theories after reading Darwin. Spencer applied evolutionary thought to fields such as culture and politics. It was Spencer who coined the phrase "survival of the fittest." Fiske has inscribed this copy of his work to Spencer. $125.

Item 166 is an Essay on the Causes of Variety of Complexion and Figure in the Human Species by Samuel Stanhope Smith, and it includes something of an early American theory of evolution. Smith was a liberal minister and philosopher, one of the founders of both Hampden-Sydney and Washington and Lee Universities, and a long-time President of Princeton. He was an early supporter of separation of church and state, and a strong supporter of scientific studies because he believed that science and religion would always reach the same conclusions. Smith also believed in the equality of the races, not a widely held view at the time. He rejected the prevailing view that the races had been created separately and unequally, describing differences as something of an evolutionary process, humans adapting to their surroundings. A bit naively, he thought lighter skin and more Caucasian features of American blacks versus African natives was an adaptation to being surrounded by whites. $125.

Item 29 is a copy of Lucien B. Chase's History of the Polk Administration. It was published in 1850, just a year after President James Polk left office. History has never quite known what to do with Polk. He greatly expanded the territory of the United States, adding California, Arizona and New Mexico, while welcoming the rebellious Texas Republic to the American fold. It would be hard to imagine America without these states today. However, he achieved his dream of "manifest destiny" by inciting a war with Mexico that enabled him to grab this territory away from that nation. What's more, the addition of this land at the time, and the question of whether it would be free or slave, set North and South against each other as never before, and set the nation rapidly down the road to civil war. $350.