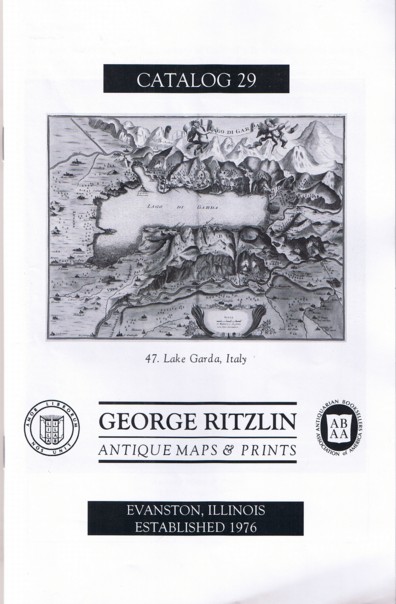 We recently received Catalog 29 from George Ritzlin Antique Maps and Prints. George and Mary Ritzlin are map experts from Evanston, Illinois, and while this is the first of their catalogues we have received, they have been in the map business since 1976. The Ritzlins note that this year marks the 400th anniversary of Galileo's first turning his telescope to the sky, making this the International Year of Astronomy. You might wonder what this has to do with maps, but maps are no more limited to the surface of the earth than are spaceships. They can carry you as far as your imagination can wander. Many of these maps, coming from long ago when much of the earth's surface was little known, certainly would have stirred the imagination of their viewers, hungry for knowledge of what lay beyond the frontier. Here are a few of the maps the Ritzlins are offering.

Item 3 presents the world as it was known, or imagined, in the late 17th century. Hubert Jaillot's Mappe-Monde-Geo-Hydrographique from 1696 repeats a few of the great misconceptions of the day. One was that California was an island, a belief that did not arise until the latter part of the 17th century, and was discredited by the early 18th. Jaillot also shows broken lines to acknowledge the existence of a great southern continent, a belief not disproved for almost another century when James Cook investigated the area. As was typical of the time, the American Northwest is largely a blank, though Jaillot imagined it reached almost all of the way to Japan. Priced at $4,000.

The Dutch mapmaking family of the Blaeus was among the greatest cartographers ever. Their atlases are spectacular. Item 12 is a circa 1638 print of their map Americae. This map of the Americas did not make the later mistake about California, though it, too, showed a much more westward extending North America, whose interior was largely unknown. The map is surrounded with insets of American natives, from southern Indians to fur-clad northerners. $10,000.

Item 51 is a 1739 map of Africa by H. Moll. Unlike the previously described maps that made no attempt to show the interior features of the American Northwest, Moll provides surprising detail of rivers and lakes in the interior of Africa. That's interesting as Europeans would have had little knowledge of what was actually there at this early date. Then again, no one could have disproved the mapmaker's claims either. $300.

Item 21 is a Map of the Progress of His Majesty's Armies in New York... from Gent's Magazine, published in 1776. The map denotes the defeat of the "Provincials," and the "Retreat of the Rebels." The British must have been feeling quite confident at the time. They had not many years ago routed the French from North America, and the ragtime Continental Army would have appeared to be no match. $350.