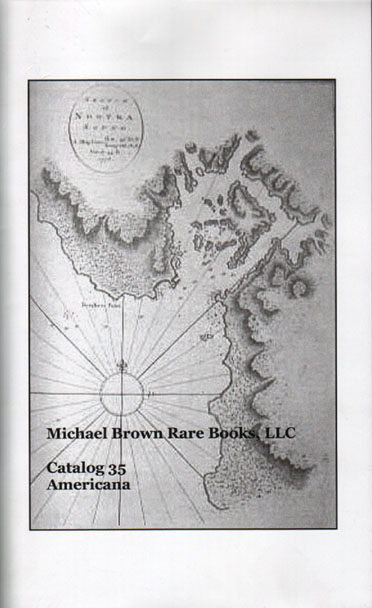 Michael Brown Rare Books has issued its 35th catalogue of Americana. This latest catalogue contains 285 items, and the only theme to it other than Americana is that there is no theme. In other words, this is not a collection heavily centered on momentous events like the Revolutionary or Civil War. Rather, it covers the more common topics, disputes, and issues taking place on this continent in another era. Here are some samples.

Today, a story like this would dominate the news for two weeks, but in 1856 there was no television to bring it into our living rooms. This book is called, An Account of the Coal Bank Disaster at Blue Rock, Ohio, in which four men were buried beneath the hill for two weeks… Amazingly, all four emerged from the mine essentially unscathed. Item 178. Priced at $200. There’s also a second title out there concerning this incident: “The Thrilling Narrative of Edgell, Pearson, Gatwood and Savage…”

Thomas Paine was one of America’s greatest early patriots. His enormously popular “Common Sense” advocated independence from Britain, and was inspirational to the Declaration thereof. Paine would later return to his native England and then move on to France, in each case getting in trouble for his advocacy of democratic values. And, with his “Age of Reason,” which questioned religious beliefs, he would lose most of his popularity in the United States. However, Paine continued to advocate the interests of those with the least power.

His Agrarian Justice, item 183 in this catalogue, published in 1797, is a perfect example. In it he advocates a form of social security, 130+ years before Roosevelt. According to Paine, every person, on reaching the age of 50, would be granted the sum of 10 pounds sterling per year (the figure was targeted at the British, but he says the proposal applies to all countries).

However, Paine goes even further in proposing that everyone be given 15 pounds on attaining the age of 21. In his English preface, Paine begins the explanation in response to a Bishop who, in attacking Paine, wrote a sermon entitled “The Wisdom and Goodness of God, in having made both Rich and Poor…” He counters “It is wrong to say God made rich and poor; He made only male and female, and He gave them the earth for their inheritance.” From this he reasons that in the natural state, everyone has the right to the land, from which they could gain sustenance. However, civilization, with personal property rights, has taken that away from those without inheritances. So, to make up for the loss of their natural property rights, Paine advocates payments be made to all persons on obtaining majority, those payments to be funded by a 10% inheritance tax on those who accumulate private property during their lifetimes. It seems much of what Paine wrote about over two centuries ago remains at the heart of political discussion today. His book is priced at $375.