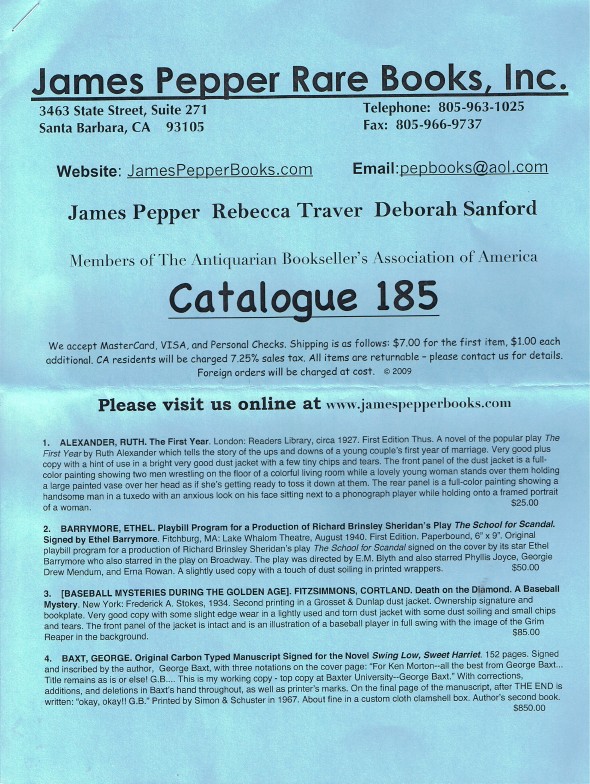 James Pepper Rare Books recently issued Catalogue 185. This one includes lots of mystery and detective fiction, science fiction, literature, and as always, much material related to the film industry. You will find many names and titles that have been cornerstones of American popular culture over the past century. Whether a reader or a viewer, you will find much that appeals to you. Here are just a couple of these items.

Item 7 is a necessity for a collection of science fiction-mystery-fantasy writer Ray Bradbury. It's his first book, Dark Carnival, published in 1947. This is a first edition which was inscribed by Bradbury in 1950 to Joseph Petracca. Petracca was a friend of Bradbury and himself a writer of short stories who helped Bradbury with the rewriting of a short story, The Fox and the Forest, published in another collection in 1951. Dark Carnival is itself a collection of short stories, most of which had been published previously, but a few of which were new at the time. Priced at $4,000.

Item 18 is a rare classic biography of the famed actor Charlie Chaplin. Chaplin was not pleased. He had first come to the attention of the public in Keystone short films in 1914. A year later, he was an overnight sensation, well on his way to becoming one of silent films' greatest stars. It was at this time that Rose Wilder Lane began interviewing him. Lane was the daughter of Laura Ingalls Wilder of Little House on the Prairie fame who had honed her writing skills assisting her mother. From her interviews, Lane fashioned a series of newspaper articles written in Chaplin's voice about his life. If Chaplin disapproved, he must have kept it to himself. However, when Lane expanded the articles to create a book, the Little Tramp was not happy. Bobbs-Merrill published her book in 1916 under the title Charlie Chaplin's Own Story - Being the Faithful Recital of a Romantic Career, Beginning with Early Recollections of Boy-Hood in London and Closing with the Signing of His Latest Motion-Picture Contract. Whether Chaplin objected to so much personal information being released or was uncomfortable that he had not always been completely truthful in describing his past is unclear. Whatever the reason, he sicced his lawyers on Bobbs-Merrill and they backed down, ordering the book withdrawn and destroyed. However, a few copies made it out of their warehouse before the book was withdrawn, item 18 being one of those copies. It comes with laid-in signatures from both Chaplin and Lane. $5,500.

Item 5 is an 1930 typed signed letter from novelist and playwright Earl Derr Biggers. If Biggers' name isn't instantly recognizable, the hero of his detective series is - Charlie Chan. Chan and his "Number One Son" would set about solving crimes at a time when such prominent roles were rarely assigned to non-whites. If Chan seems a bit stereotypical by today's standards, Biggers intention was to portray his Chinese star in a favorable light at a time when most such images were decidedly negative. In this letter, Biggers gives his opinions of many of the detective fiction writers of the day. However, he notes, "...as a matter of fact, I read very little of that sort of fiction," pointing out that too great a familiarity with someone else's style could handicap his own creativity. Nevertheless, he is most complimentary of those other detective writers he didn't often read. $3,750.

In a sign of the times, the man chosen to portray Charlie Chan in the movies was a Swede of all things, Warner Oland, a man whose facial features had previously garnered him the role of Dr. Fu Manchu. Item 86 is a signed photograph of Oland in 1936, made up as Charlie Chan. $1,250. Oland died in 1938, and the Chan role then fell to Sidney Toler, a Scottish American. It says something about the times. Item 107 is a 1940s publicity photo of Toler in the Chan role. $950.