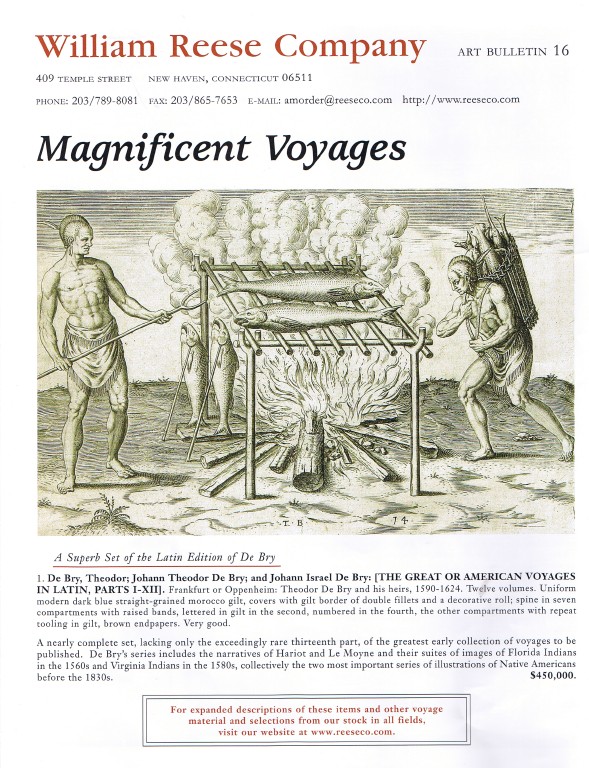 The William Reese Company has issued its 16th "Art Bulletin," with the title Magnificent Voyages. It consists of 11 spectacular items, most being books which contain notable illustrations, though there are sets of watercolors offered. The works range from the 16th to the 19th century, and they describe some of the great explorations of what was then an unknown world to Europeans. Included are illustrated works from travelers on specific voyages to compilations of reports of many early travels. All are illustrated with views of the world that must have caused wonder and amazement when viewed by the folks back home. Here are the eleven items offered in this bulletin.

1. The Latin edition of Theodor De Bry and his heirs Great Voyages, 12 volumes (lacking the extremely rare 13th), published from 1590-1624. It contains illustrations of North American Indians from Florida and Virginia (see cover illustration). Priced at $450,000.

2. Samuel Purchas' Hakluytus Postumus or Purchas His Pilgrimes. The second great collection of English voyages expanded greatly on the work of Hakluyt, covering over 1,200 worldwide voyages, many to the New World. Five volumes published 1625-1626. $200,000.

4. A complete set of Cook's three voyages, the first and third in second editions, the second voyage in a first edition. The set includes the folio atlas. $85,000.

5. Graphic Scenes of the Japan Expedition, an 1856 publication of ten prints, nine from Wilhelm Heine, the official artist on Matthew Perry's "visit" that opened Japan to trade. $5,000.

6. A Voyage to the South Atlantic...for the Purpose of Extending the Spermaceti Whale Fisheries, by James Colnett. This 1798 book is the first important published account of the Pacific sperm whale fishery. $17,500.

7. An album of six watercolor illustrations of Kamchatka and Siberia circa 1808 based on plates taken from Cook and others. $60,000.

8. Set of four hand-colored aquatints of Cook's final voyage, including a depiction of Cook's death, from James Cleveley, the ship's carpenter. $30,000.