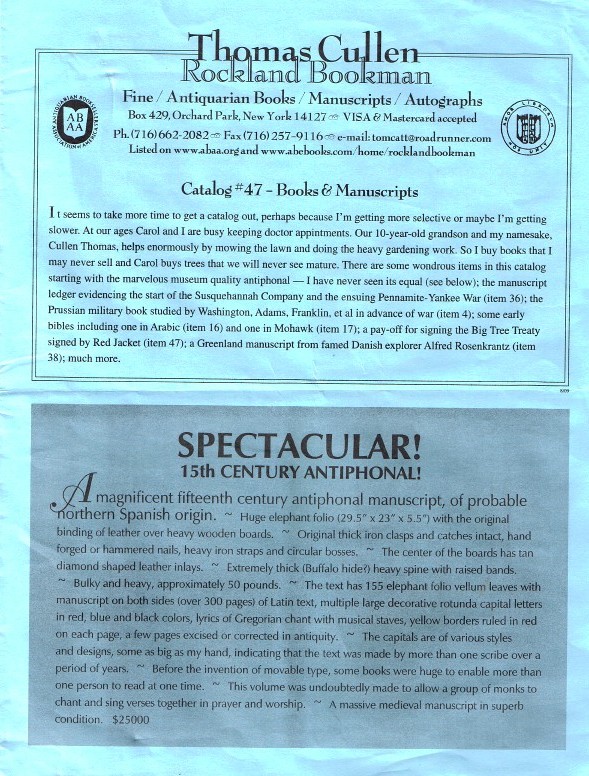 Thomas Cullen Rockland Bookman has issued his Catalog #47 - Books & Manuscripts. We will make no attempt to suggest a title more specific than this. There is no thread we can decipher beyond being a book or a manuscript that binds these items together. You may find anything here - from a 15th century religious manuscript to a 19th century support bond for bastard children to a series on Buffalo Bill in French, they are all here. We will describe a few of these fascinating items, but with the caution that there are plenty of things to be found in this catalogue with no resemblance to the ones we select.

Item 31 is the Civil War diary of Sgt. Johnson Miller of the 14th Ohio volunteers. War is always Hell, but this war was particularly hellish. Casualties were unimaginably high. The diary begins on January 1, 1864. Miller has already been wounded, but is looking forward to rejoining his regiment. "I do not want to leave my comrades until this bloody struggle is closed," he writes. Miller did make it back to action, but on June 21, he was injured again. He is sent to a hospital in Nashville where he writes of the horrible injuries he sees. From there, he is also able to witness the build up of Confederate forces around the city in December of 1864, and finally the Battle of Nashville, when the second largest Confederate force was routed and effectively eliminated from further participation in the war. Priced at $1,400.

Times were difficult during the Civil War, particularly in the South, but life went on. Even during the midst of terrible war, children had to learn arithmetic. Item 54 is a Confederate textbook: Our Own School Arithmetic, published in 1863. It is the first arithmetic authored and published exclusively in the Confederate states. Hopefully, the children learned arithmetic better than their parents, because if the Confederates had done their math a little better, they might have realized the number of forces they had compared to the North did not add up to victory. $275.

There is a bit of irony in this Alabama manuscript legal claim from December 1865. It is a claim by one W.E. Murphey on the estate of L.J. Watkins for $48 for 15 trips between 1862 and 1865 to provide medical treatment to his slaves. There was a day when doctors made house calls even to slaves. The irony, of course, is by the time this claim was made they were slaves no more, having been freed with the end of the war. Nonetheless, the estate was liable for the charges. Hopefully, the former slaves were enjoying good health in their newly won freedom. Item 1. $125.

Item 72 consists of six letters from Midshipman Cyrus Adolphus Branch from Virginia. These letters to his mother and sister date from 1817 to 1820 and come from places such as Boston and New York as well as in preparation for a trip to Africa. However, Branch evidently got into some sort of dispute in Cuba in 1821 and engaged in a duel. He lost. Branch was just 24 at the time. Branch must have been a bit of a complainer as Cullen observes, "Reading his complaining, demanding letters to his relatives makes one glad someone shot him." In fairness to Branch, his brother named his first son after him the following year, so he must have appreciated Cyrus Adolphus (perhaps he didn't receive any letters from him). $300.

Item 94 is a most interesting letter from "Douglas" of South Carolina to William Walker of the same state. It is dated July 30, 1849, and the writer describes an incident reflective of fears many in the South held of a slave insurrection. He writes about a "...violent outbreak that took place in work house by a few rebellious negroes - that attempted the lives of the keepers...three of the principle fellows were immediately arrested, tried and hanged after some others escaped from the city...they were to be tried today and I have very little doubt at least four more will be hanged." $250.

Item 85 is a Pennsylvania German broadside circa 1810. It is an incantation against fire and pestilence with an account of a Gypsy who extinguished a fire in Prussia by reciting it. You may try it too in case of fire, but I'll call the fire department. $350.