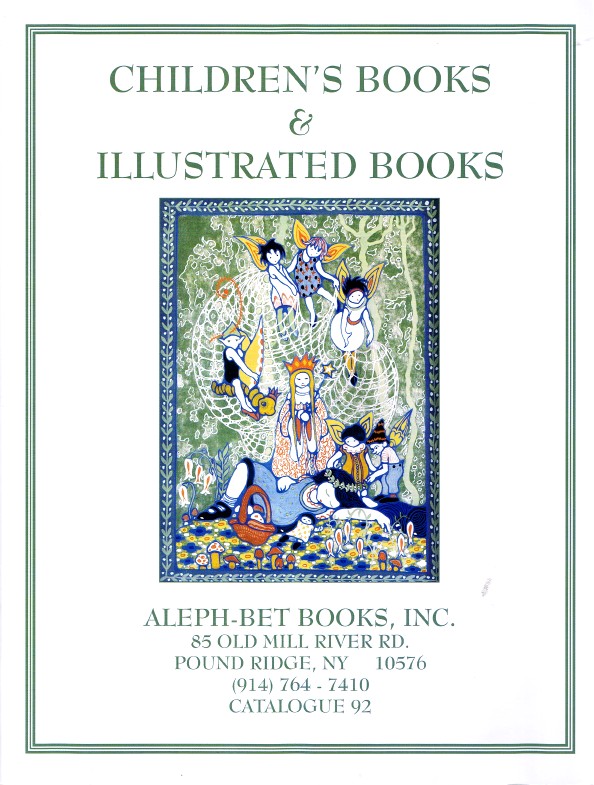 Aleph-Bet Books has issued a new catalogue of Children's Books and Illustrated Books. This is their 92nd catalogue and it follows their familiar format - 600 books with both clear descriptions and a color photograph of each one. These are books filled with fantasy, though the messages they impart are often very real. The values, and sadly, the prejudices of their times are revealed in the lessons past generations taught their children. Future collectors will undoubtedly say the same about the books we use to teach our children today. There is much to be learned from these books, even if technically they fall under the heading of "fiction." Here are some of the books Aleph-Bet has for us this month.

Ethnic prejudice was a staple of many early children's books. Blacks were the most frequent victims, with cruel, stereotypical portrayals which made even "Sambo" seem positive. Copies of the Ten Little N....'s abound, including editions in German and French. There are also anti-Semitic books. Some, not surprisingly, come from Nazi Germany, where stereotypes are even worse than degrading. Yet, here we find one from England, an ugly version of The Story of Mother Goose, by Frank Adams, published in 1920. Seems that in Adams' version of Mother Goose, Jack attempts to sell the golden egg laid by his goose to a Jew who beats Jack up and steals it. Item 59. Priced at $300.

A much more peaceful message can be inferred from item 372, The Story of Ferdinand. This 1936 classic by Munroe Leaf tells the story of Ferdinand the Bull, who would rather smell the flowers than participate in a bullfight. Coming on the eve of the Spanish civil war, and the much larger conflagration lying in wait behind it, it was regarded by many as some sort of subversive, pacifist plot. It was banned in Spain and Germany, though it seems that Leaf was more attempting to write a nice story for children than create a political uproar. Unfortunately, there was little use for Ferdinand's role model among those nations and Ferdinand was not able to prevent war, though he tried his best. $8,500.

Now for some children's verse that is far less controversial. If there is some hidden message in the famous Purple Cow poem, it remains hidden to me. Nevertheless, generations of children have been amused by this four-line stanza, thankful they are not themselves such a beast. Item 145 is The Purple Cow, the first book of nonsense rhymes created by Gelett Burgess, including, naturally, the title poem. $475.

Item 214 is a picture book with a different take on Robinson Crusoe. In Clifton Bingham's circa 1900 version, Jumbo Crusoe, Robinson is depicted as an elephant, and Friday as a bear. There is a brand of peanuts known as "Robinson Crusoe Virginia Peanuts" which Jumbo Crusoe undoubtedly would have appreciated. $1,500.