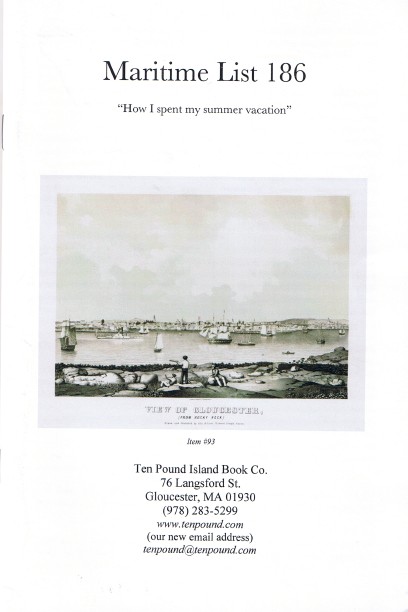 A new catalogue for those who are drawn to the sea has arrived from the Ten Pound Island Book Company, Maritime List 186. This catalogue is filled with works pertaining to sea voyages, naval confrontations, sailing, shipbuilding and design, and all sorts of books that are related to the seas (and a few connected to rivers). Those who believe books and water don't mix will find this a great awakening. These are some of the books we found in this latest catalogue-by-the-sea.

Item 10 is an important work on American whaling at the middle of the 19th century: Etchings of a Whaling Cruise, with a Note of a Brief Sojourn on the Island of Zanzibar. This book, which provides much information about Pacific whaling, was written by Ross Browne and published in 1846. A review of it written by Herman Melville was published in Literary World the following year. It was an important resource for Melville who published what many consider the "great American novel," Moby-Dick, a whaling story, four years later. Priced at $950.

There would be far fewer exciting sea tales were it not for the one major unpredictable factor that changes smooth sailing to stormy seas - the weather. There are few places where the weather can be as unpredictable as the land of the perfect storm, New England. For the past century-plus, we have good records of climatic history. Here is a book that provides a look at events prior to regular recordkeeping, Sidney Perley's 1891 Salem-published book, Historic Storms of New England. The books describes, "Its gales, hurricanes, tornadoes, showers with thunder and lightening, great snow storms, rains, freshets, floods, droughts, cold winters, hot summers, avalanches, earthquakes, dark days, comets, aurora-borealis, phenomena in the heavens, wrecks along the coast, with incidents and anecdotes, amusing and pathetic." Sounds like a very dangerous place to live. Item 83. $150.

Item 35 is Charles Fay's 1942 book about perhaps the greatest of all mystery ship stories, entitled Mary Celeste. The Mary Celeste was a sailing ship which left New York in 1872, loaded with barrels of alcohol destined for Italy, where the cargo would be used to fortify wine. There were ten on board, the experienced Captain Benjamin Briggs, his wife and young daughter, and a crew of seven. The ship was discovered about a month later, unmanned, adrift at sea, no signs of any trauma or indication of why the crew had disappeared. There was some water in the hold, but not enough to make her unseaworthy. None of the cargo was missing, though nine of the barrels were empty. A few pieces of navigation equipment were gone as was the lifeboat. There were no signs of any struggle such as to imply piracy of mutiny. No pirates had operated in the area for decades and nothing of consequence was missing. There were no reports of bad weather, and despite the water, an experienced captain such as Briggs would have known there was no immediate risk of sinking. To this day the disappearance of the crew remains a mystery. The most likely explanations appear to be that the empty barrels had leaked, causing strong fumes that led a panicked crew to evacuate in fear of explosion, or that a waterspout had led them to believe the ship was sinking. Some speculated that those on the ship that found the Mary Celeste murdered the crew for the salvage reward. However, these are just theories, not likely ones, just perhaps a bit less unlikely than others advanced. $125.