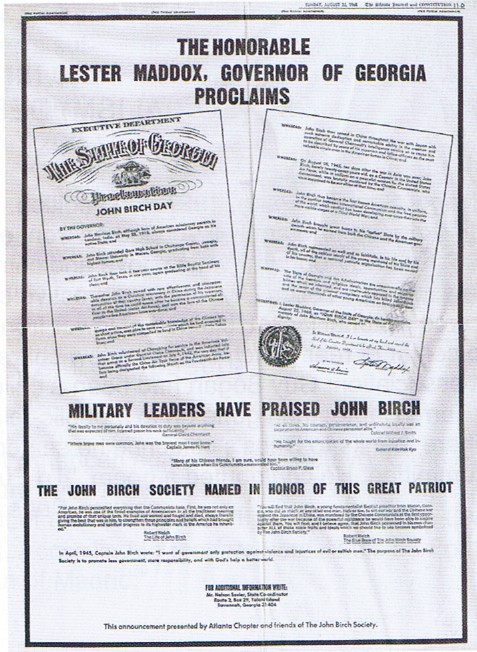 
That eerie figure with the die-cut eyes you see on the cover of this catalogue is actually a mask from the Vietnam War era. It is the face of William Calley, at the time (1969) accused of war crimes, later convicted. It was worn during the 1969 March on Washington to imply that all Americans were war criminals so long as the Vietnam War continued. Item 94. $125.

Item 84 was a book written to support one cause, but became the standard work for another. It is Upton Sinclair's The Jungle, published in 1906. It was meant to awaken people to the miserable conditions facing Chicago's poor immigrants, but instead it awakened America to the unsanitary conditions in the meat-packing industry. Sinclair later wrote, "I aimed for the public's heart but by accident I hit it in the stomach." Interestingly, though the public has turned on government involvement in so many social causes once championed by the left, no one seems to be arguing for the government to stop inspecting meat and other food sources, even if that is kind of socialist behavior. $350.

The gay rights movement has finally achieved some notable victories in the past few years, but it had little public support a half century ago. It was a subject most would not even mention in 1957 when Helen Branson published Gay Bar. Branson operated a very early "gay bar," Helen's, in San Francisco, a meeting place for those involved in the earliest stages of the gay rights movement. Item 43. $650.

Here is one of those items from the other side of the political spectrum. It is a proclamation from The Honorable Lester Maddox, Governor of Georgia. The "Honorable" Lester Maddox proclaimed August 8, 1968, John Birch Day. Birch was an American in China in the 1940s, killed by the Communists. To those well right of center, he was the first casualty in the war against communism, and so a group of rightists named their organization for him, the John Birch Society. Such a group would have met with the approval of Governor Maddox. Maddox was a restaurateur who gained recognition for threatening those who sought to integrate his restaurant with "Pickrick drumsticks" (clubs named after his "Pickrick" Cafeteria). When the law closed in on him, Maddox closed down his restaurant rather than serve blacks. For this, the voters rewarded him with the governorship of Georgia in 1967. The Georgia constitution prevented Maddox from succeeding himself, so in 1971 he ran successfully for Lieutenant Governor and served under the new Governor, Jimmy Carter. Item 95. $125.

Lorne Bair Rare Books may be reached at 540-665-0855 or info@lornebair.com. The website is www.lornebair.com.