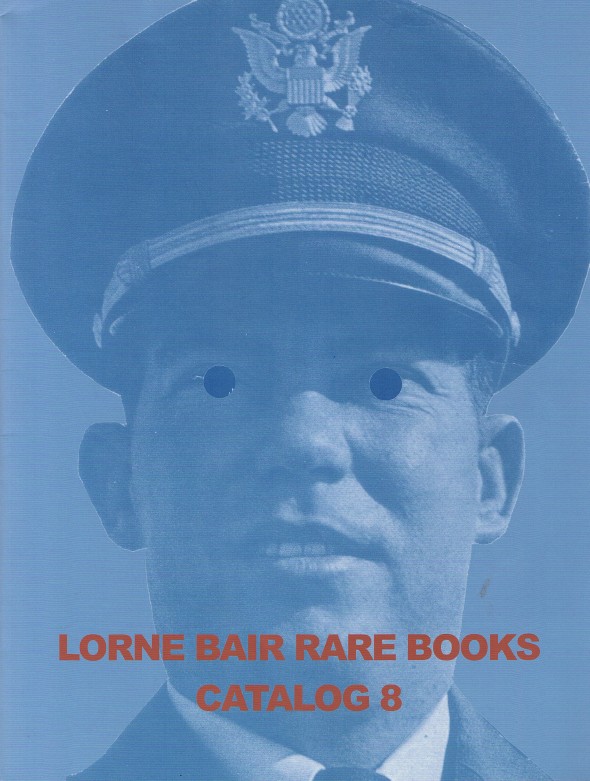 This month we received our first catalogue from Lorne Bair Rare Books of Winchester, Virginia. Lorne Bair has been a bookseller for the past 15 years and is a member of the ABAA and Virginia and nearby Washington (D.C.) antiquarian bookseller organizations. Recently published is Bair's Catalog 8 and it is filled with their specialty, books related to radical and other leftist movements and causes over the years. There are books pertaining to socialism and anarchism, equal rights movements for blacks, women and gays, much on the labor movement and workers' rights, utopian communities, prison reform, and the Spanish Civil War. Items range from the abolition movement to the Vietnam War. While most of these works come from the left, Bair does provide some balance, so you will also find a few racist pieces, KKK and John Birch points of view represented. For those who like their politics removed from the safe center, Lorne Bair Rare Books has items you will appreciate. Here are some examples.

Item 20 is a plea involving one of the most noted of civil rights cases, that of the Scottsboro Boys. The Scottsboro Boys were eight black teenagers, accused, convicted, and sentenced to death for raping two white women when all were traveling on a freight train. Evidence was sorely lacking, but in 1932 Alabama an accusation of a black man raping a white woman was as good as a conviction. The defendants were lucky to avoid being lynched before their convictions were issued. Their case went to the U.S. Supreme Court twice, and was struck down twice, once for ineffective counsel, once for failure to include blacks on the jury. During the height of this legal confrontation, this plea was issued: Mr. President: Free the Scottsboro Boys! It includes contributions from two of the Scottsboro mothers plus a preface from the great novelist Theodore Dreiser. It was published in 1934. After a couple of overturned convictions and death sentences, some of the defendants were released, others pleaded guilty for reduced sentences, and eventually all were freed. The last still subject to possible arrest was pardoned in 1976 by Governor George Wallace of all people, though at a time when he was beginning to repent for his earlier segregationist views. Priced at $250.

Item 12 is one of the stranger Utopian pieces: Secret Enemies of True Republicanism. Most Important Developmments [sic] Regarding the Inner Life of Man and the Spirit World, in Order to Abolish Revolutions and Wars and to Establish Permanent Peace on Earth... Nice sentiments from the author and Benedictine monk Andreas Smolnikar, but it appears the good monk may not have had both feet on the ground. He had become infatuated with the ideas of fellow German immigrant J.A. Etzler, who developed plans for a machine that could cultivate 20,000 acres of land for less than $1 an acre and with the labor of only 3 or 4 men. That's a stretch by today's standards, but with only the benefit of mid-19th century technology, he should have known better. Smolnikar apparently built the machine, but it immediately broke down. One of his followers, George Karle, had a vision revealing how it could be fixed, but drowned before repairs could be made. Smolnikar pinned the blame for Karle's death on Mormon founder Joseph Smith, even though Smith was dead, explaining Karle died as a result of "the instrumentality of the departed Mormon prophet Joe Smith, not directly but by the instrumentality of a cow." Makes perfect sense. The book was published in 1859. $1,500.