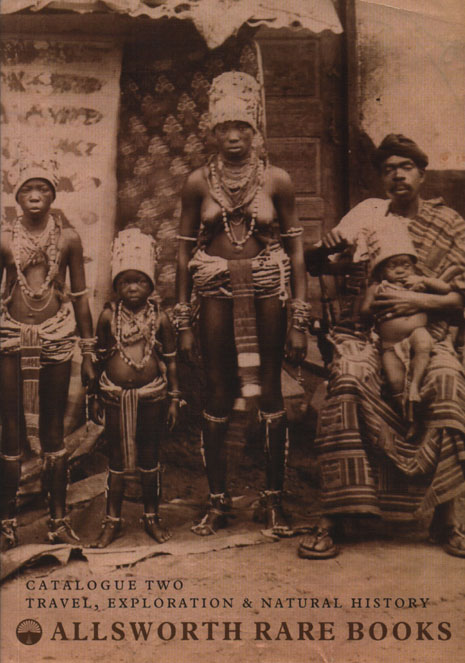 This month we review our first catalogue from Allsworth Rare Books of London. The title of this catalogue is “Catalogue Two, Travel, Exploration & Natural History.” While there is no limit to places explored, many of the works in this catalogue recount journeys to Africa. Most were penned by missionaries in the 19th century. While the American continent had more pure explorers, traders, and trappers, it seemed to take a deeper calling to draw Europeans into the deepest jungles and deserts of Africa. Naturally, their missionary goals and European assumptions cloud their views, but still they provided a glimpse into a world that might otherwise be forgotten. Colonization and modernization have permanently changed the face of Africa.

One of the more interesting titles is by Pascoe Grenfell Hill, Fifty Days on Board a Slave Vessel in the Mozambique Channel, in April and May, 1843. This 1844 first edition recounts the boarding of a slave ship on which the slaves had recently overpowered their captors. Hill, a minister, found some were still removing their chains. He describes the appalling conditions under which they lived, and many, died. This book was reprinted in 1996 by the Black Classic Press as it is a timely reminder of just how horrific slavery and the slave trade was, but the original first edition carries the connection of being printed while the practice was still going on. Item 74. Priced at £950 (British pounds).

Quickly moving from the sublime to the ridiculous, there is To Lake Tanganyika in a Bath Chair by Annie Boyle Hore. A bath chair was a wheeled chair, generally three-wheeled, that ladies as well as those with handicaps used in the 19th century. I don’t know how Annie Hore managed the 830-mile journey in such a device as there certainly wouldn’t have been much in the way of paved roads or sidewalks available in 1886, but someone will soon have the opportunity to learn how. Allsworth describes her trip as a “remarkably eccentric journey.” Item 77. £1,500.

Nestled into this collection of generally more obscure titles is one everyone knows, On the Origin of the Species by Means of Natural Selection… by Charles Darwin. There isn’t much I can tell you about this book you don’t already know, other than to say the copy offered is an 1859 first edition and is in very good condition. Item 48. £22,000.